Yeah. So. I am officially taking a break this week from blogging as is my start of the year transition. The truth is I have no reviews or posts ready and only ten minutes to spare on the computer right now (I'm supposed to be getting dressed for a run to the hardware store).

Before I do go on break, however, I am caving in and joining two more challenges. Well, one challenge and one project. Don't judge. It is the beginning of the year, and I don't make New Year's resolutions. But being goal oriented, I have to put my energy somewhere. My intentions are good, anyway.

I haven't been reading nearly enough historical fiction as of late and I really like the folks over at Historical Tapestry. Therefore, I am joining the Historical Fiction Challenge. I am aiming for the Out of My Comfort Zone level requiring me to read two books even though historical fiction isn't really outside of my comfort zone. It's what I feel I can manage though and since I'm already challenge crazed it's best to keep things simple, wouldn't you say? The challenge lasts throughout the year. I have a ton of historical fiction novels on my shelves still to read--now to decide which two to read! 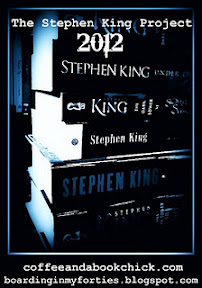 Just yesterday I was putting something away in the spare bedroom where I keep my mass market paperback books (the ones not on the bookcases in the master bedroom that is) and noticed my Stephen King books. I would really like to read one this year if possible. Then I saw Kathleen and Natalie's announcement of The Stephen King Project and decided I couldn't refuse. Since I was already going to read one anyway, right? So, off I go to sign up for the the King Novice Level! I have actually read two King books, but I still think of myself as a novice. I really enjoyed one and laughed my way through the other. It'll be interesting to see what I think of the next book I read by Stephen King.

I haven't decided yet which book of his to read. I'm dying to know what is so freezer worthy about The Shining, but I really want to read The Dead Zone, of which the television show was based (the one I watched episode after episode of while on maternity leave while cluster feeding). And then there's The Stand and the Dark Tower series . . . Hmmm. Choices, choices.

Enough is enough. That's it. No more challenges.