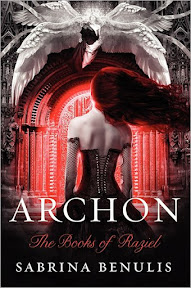 Israfel rather enjoyed the sight of the human stumbling into his nest. [opening sentence]

Archon: The Books of Raziel by Sabrina Benulis
Harper/Voyager, 2012
Fantasy/Horror (YA); 385 pgs

When I first read Daughter of the Blood by Anne Bishop, I found myself on shaky ground. I'm an extremely visual reader, creating scenes and characters in my head as I read the words on a page. I picture everything. With the first book in the Black Jewel's Trilogy, however, I had trouble seeing the world the author had created in my mind's eye. I can't explain why, just that it's so. Perhaps it was the way the author jumped right into the story and took off running. It was the same for me with Archon by Sabrina Benulis. And yet both books captivated me, drawing me into their worlds. Even when I wasn't reading, I felt a little like I had one foot in the book and the other in reality. I love it when a book has that effect on me.

Set in Luz, a city on the cusp of all that is holy and hell, the novel is about a damaged young woman who wants nothing more than to die. Only she can't. Every attempt she makes ends in failure. Haunted by visions of angels, Angela longs to join them. She is sure she will find answers at the Vatican's exclusive university in Luz.
A prophecy foretelling the end of the world warns of the coming of the Ruin or Archon. The Archon is believed to be the reincarnation of the once powerful angel, Raziel. Angela is one of many who fit the description of this alleged Ruin with her red hair, pale skin and mystical powers. Considered freaks of society and ostracized, the blood heads are both feared and hated.
Angela becomes the target of a particularly nasty sorority leader who will stop at nothing to prove that she, Stephanie, is the Archon. Soon Angela finds herself at the center of the struggle between Heaven and Hell--where good and evil are blurry at best and where the likely outcome is life or death.

Despite my initial difficulty picturing Luz, I found Archon to be an intense and entertaining book. The characters were fascinating--flawed and mysterious, beautiful and yet ugly. The whole evil versus good came into play time and time again and was upended just as many times throughout the book. It was hard not to feel sympathy for even the darkest of characters. Angela, the main protagonist, is a strong young woman despite her insecurities. She shows courage and decisiveness when she most needs it. And yet clearly she is quite damaged, having been terribly abused as a child because of her blood head status.
The angels in Archon are more like the ones in the television show Supernatural than they are from the show Touched by an Angel. The angels are prideful and self-centered, having their own agenda that doesn't always include the humans. It makes it all the more interesting. I confess I didn't see the allure of any of the angels really. Sure they were beautiful, but their personalities left a lot to be desired.

Of all the characters, the one that I was most drawn to was Sophia. She is a mystery right from the start. Kim, too, was an especially interesting character. He and Angela seemed well suited for each other. I was never quite sure of Kim or Sophia--where their loyalties lied. Both are still a bit of a mystery and I hope to learn more about them in future books.

It's hard to believe this is a debut novel. The author expertly weaves the characters and their stories together. There are several moments throughout the book that left me holding my breath, afraid of what was to come and yet dying to know what would happen. I picked up Archon to read on a whim and am so glad I did. It was an exciting read and I look forward to seeing what else Sabrina Benulis has to offer. I just hope she doesn't take too long!
To learn more about the author and her book, please check out the author's website.