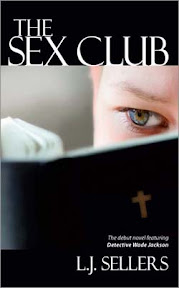 
L.J. Sellers is an author I came across via Twitter. I enjoy reading her tweets, and we've had the opportunity to interact once or twice. I bought an e-book copy of the first book in her Detective Wade Jackson series several months back after having read a couple of good reviews of it.

The product description at Amazon sums up The Sex Club quite succinctly:

A dead girl, a ticking bomb, a Bible study that's not what it appears to be, and a detective who won't give up.

Detective Jackson of Eugene, Oregon is initially assigned to investigate the bombing of a Planned Parenthood Clinic that performs abortions. That same day, however, he is reassigned to the murder of a young adolescent girl who he soon discovers was once his daughter's friend. Evidence suggests the girl had been sexually active, likely right up to the time of her death. As the investigation unfolds, Detective Jackson uncovers more than he bargained for. Meanwhile, he is pulled back into the bombing investigation when a nurse at the clinic who had treated the murdered girl before her death is targeted by the anti-abortion terrorist.

I found The Sex Club entertaining and suspenseful, just as a crime fiction novel should be. Detective Jackson is a likeable and sympathetic character. He is raising his 13 year old daughter on his own along with juggling his job as a detective with law enforcement. He hits it off with the nurse from Planned Parenthood, Kera, whose own marriage is dissolving. Both are lonely and drawn together by circumstance.

I really like Kera. She is a caring individual who finds herself in a precarious position. She has information that might help the police with their murder investigation, but due to confidentiality, she is unable to share it. Like her, I found myself looking for a loophole to make it possible. As a layperson, it's easy to say, "Just tell them! It's for the better good!" Unfortunately, it's more complicated than that. Confidentiality laws exist for a reason and breaking the laws could result in anything from a fine, loss of a job to imprisonment, not to mention the ethical implications.

In an interview I read with the author recently, she commented on getting some flack for writing about such young adolescents (13-14 year olds) having sex (for the record, the novel is not at all graphic in that regard). The reality is that they do. Like the author, I think it's important to acknowledge that fact for a variety of reasons, most important of which is to educate our children. And while parental control and influence can only go so far, there is also peer pressure to contend with.

I did have one issue with the book, which is fairly insignificant to the story itself, but it really got under my skin. In a couple of instances in the book, it is implied that evidence of an orgasm means sexual intercourse is consensual. Regardless of whether the murdered girl was a victim of assault or if the sex was consensual, it bothers me that the authorities, medical and law enforcement, would jump to that conclusion so easily. It is in fact possible for a victim of rape to have an orgasm. Male or female. It's a physiological response. And it often leads to further guilt in victims who experience it. As I read the novel, I hoped that this misunderstanding would be resolved but it never came up again. This particular issue stands out for me because of my work, and so maybe I am just overly sensitive to it. However, I would hate for anyone to walk away from reading this book with the wrong impression. In my mind, such thinking can be extremely detrimental.

Did this hurt my enjoyment of the book? At first. After ranting and raving about it to a couple of my friends and husband, I got it out of my system for the most part--enough to continue with the book. It wasn't hard to do as I really was invested in the characters and their plights. Would I recommend this book to others? Yes, I would. I would even like to get to know Detective Jackson a little more and perhaps Kera if she happens to continue on through the rest of the series.

You can learn more about L.J. Sellers and her books on the author's website and blog.

Source: I purchased this book on my nook.