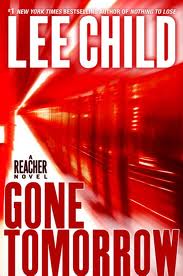 Suicide bombers are easy to spot. They give out all kinds of telltale signs. Mostly because they're nervous. By definition they are all first-timers. [first paragraph of Gone Tomorrow]


Like John Sanford, Lee child is one of the authors I have wanted to try for a while now but never seemed to get around to reading. When Gone Tomorrow came my way, I couldn't resist--even if it meant jumping into a series 13 books in. Fortunately, Gone Tomorrow is one of those series books that stands alone just fine. Although, I have to admit that I'm even more curious about Jack Reacher's past now. Imagine living your life in such simplicity that you travel at will, have no home, no luggage, with just a toothbrush and your wallet in your pocket.

That's the way we first meet Jack Reacher in Gone Tomorrow. Ex-military, he is extremely skilled and observant. And so when he oberves a lone woman sitting in a subway car, meeting the criteria of a possible suicide bomber, Reacher has no choice but to take notice. After mulling the idea of what to do over in his head, he approaches the woman cautiously, not sure what to expect.

From that moment on, the story that unfolds is full of unexpected twists and turns and multi-layered. Reacher finds himself the target of both the bad and the good guys. The novel reminded me of a Greg Rucka novel, with the tough, no nonsense hero at its helm. It's purely entertaining even if not entirely believable--and that's okay. It was easy to fall into Jack Reacher's world for a short while and ride the subways of New York along with him. I was hooked from page one.

At this point, I am not really sure what I think of Jack Reacher himself. I would like to have seen a more vulnerable side to him, I think. There is no doubt he is intelligent. He does his own thing, no matter the consequences, wanting to get to the truth of a situation. He is just as likely to use his brain as his fist, and there's no shortage of good fight scenes in the book. He definitely isn't someone I would want to mess with--or necessarily invite over for lunch.

As much fun as I had reading Gone Tomorrow, I cannot say whether or not this will become a series I will love. I am eager to start with book one in the series, however. I have a feeling Jack will grow on me, and I hear those earlier books in the series are not to be missed.

For more information about Lee Child and his books, visit the author's website.

Source: I entered a drawing and won to preview the paperback copy of Gone Tomorrow through Book Browse First Impressions.