From Book to Film: Let the Right One In 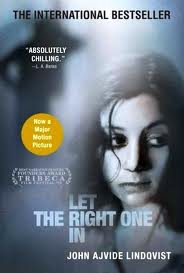 
I like horror novels now and then. I prefer the psychological variety to the blood and gore type novels. I confess to finding the gory ones a bit ridiculous and so find more humor in them than a sense of fear.

Most of the novels I read that involve vampires don't really count as horror. I suppose some of the dark urban fantasy novels I read could fall into that category to some degree. When I first began reading Let the Right One In, I wasn't really sure what I was in for. It has that definite suspense/thriller feel to it. There's a mystery too. The horror of the novel crept up on me and by the end, there was no question what type of book Lindqvist has written.

Usually I have no problem keeping characters straight, but I was a tad confused at first with the way the novel jumps around, especially at the beginning. I'm still not sure I figured out who everyone was, but that didn't hurt my enjoyment of the novel.

Oskar is a 13 year old boy living in the suburb of Blackeberg. He has a fascination murderers, often dreaming of being a killer himself. It's no wonder really, given he's the victim of bullies at school who wants nothing more than to hurt those who hurt him. Oskar has no friends and leads a lonely existence. Until, that is, he meets Eli, his twelve year old neighbor who seems just as much an outcast as he is. Eli is not your typical 12 year old. There is something odd about Eli, which Oskar senses right away, and yet he can't put his finger on it.

The town they live in is in high alert because of the recent death of a boy in a neighboring suburb. It appears to be the work of a serial killer, and when another body, this time of an older man, the police are sure they are right. Other strange things begin to occur as well, raising suspicion and adding confusion. Only a couple begin to wonder if they have a vampire in their midst. After all, vampires aren't real, are they?

Let the Right One In is very dark and not for the faint of heart. It isn't the violence, although it can be violent at times, which makes it so. The pedophilia will turn just about anyone's stomach. It isn't glamorized and it certainly has its part in the story--but, well, it's impossible not to feel disgusted by it all the same. There is also a scene involving cats which isn't at all pretty. I skimmed over that part quickly, something I don't often do, but it was just too disturbing for my sensibilities.

The novel was never without suspense and there was always that underlying creepiness. I liked the first half of the novel more than I did the second but thought it was good overall. I think that had a lot to do with a shift in focus--the novel being more suspense/thriller in the first half and becoming more definitely horror in the second half.

After reading the book, I wasn't so sure I wanted to see the movie after all. But I couldn't resist. And I probably should have. The movie was okay. Set in Sweden, the landscape was breathtaking--all that snow--just how I pictured it as I read the book. The book is on the long side and the movie, just under 2 hours long, wasn't nearly enough time to cover everything in the novel, which was to be expected. And I wasn't too surprised that some of the themes running through the book were completely left out of the film. Those types of things don't generally bother me. I can easily enjoy movies and books in their separate mediums, even while making comparisons.

I did find the movie lacking though. It didn't hold the same suspense I felt while reading the book or that constant feeling of creepiness. I do have to give credit though to the fact that the relationship between Oskar and Eli was very well played--two lonely souls coming together in friendship. The movie really brought home the bond the two had formed.

I am not sure I will be watching the American version (I saw an ad for it the other day). I think the running title is Let Me In. It doesn't quite have the same ring to it as Let the Right One In, if you ask me. And, well, I'm not a big horror movie fan.

Source: Book provided by the LibraryThing's Early Reviewer Program. Movie rented through Netflix by myself.
© 2010, Wendy Runyon of Musings of a Bookish Kitty. All Rights Reserved.If you're reading this on a site other than Musings of a Bookish Kitty or Wendy's feed, be aware that this post has been stolen and is used without permission.
Posted by Literary Feline at 10/18/2010 12:00:00 AM