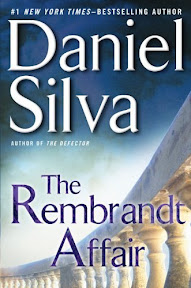 I fell in love with the character of Gabriel Allon when I first met him in The Messenger and am ashamed to say that it's taken me four years to visit him again, this time in Daniel Silva's latest book, The Rembrandt Affair. With a little nudge from TLC Book Tours, I finally got the chance, however, and am now kicking myself for waiting so long. And what is it with me and reading series books out of order so often since I started blogging? That's a topic for another time . . .
To add a little spice to the tour, the publisher sent tour participants a list of questions to respond to as part of The Rembrandt Affair Tour. It's a nice change from the usual review, and the questions were quite fun to answer.


If you were to write a blurb in fewer than three sentences for The Rembrandt Affair, what would it be?

What appears as a simple case of art theft and murder quickly evolves into a fast paced thriller that takes the reader back in time to the Holocaust where a bargain is made to save a life, and up through the present day conflicts that pose a threat on a global scale. Israeli spy and art restorer Gabriel Allon comes out of retirement to untangle the web of betrayal, greed, and murder, all centered around one woman, the portrait of a lover.


Gabriel Allon is a talented spy and assassin, but also a master art restorer. If you could have two careers that seem to be complete opposites, what would they be?

Growing up, I lived a lot in my imagination, whether it be through the books I read or the stories I created in my own head. I often found myself having an ordinary job such as being a social worker working with runaway teens or the homeless one moment, and then in the other, being a consultant for the FBI, helping solve some of their biggest crimes. While that still sounds appealing today, I also can see myself being a librarian by day and a singer in a small out of the way club by night. With maybe the occasional crime fighting on the side. I love a good mystery after all.


What three words would you use to describe the character of Gabriel Allon?


The Rembrandt Affair takes the reader all over the world. Of all the locations mentioned, which would be your ideal vacation spot?

I have always wanted to travel to the United Kingdom, and Gabriel's hideaway in Cornwall sounds perfect. Quiet and by the water . . . Vacation spot? Heck, I wouldn't mind living there.


Art theft plays a major role in the novel. If no crime were involved, what piece of art would you like to have in your home?

I am afraid that art, other than in the form of writing, is not a big area of interest for me. I am quite content with a beautiful landscape painted by a local artist or perhaps a seascape by my mother-in-law. I am fascinated, however, by the idea of art restoration and art history, two subjects The Rembrandt Affair covered quite well.


Zoe Reed is a powerful female character in the novel. Tell us about an influential woman in your life.

I have never met her nor will I ever likely, but her book, One Child, shaped the course of my life in ways I could not fathom at the time I first read it. Torey Hayden is a child psychologist and special education teacher who refused to give up on even the hardest of situations, faced with teaching children who had been severely emotionally damaged. She was not able to help all of the children she worked, with and she certainly made plenty of mistakes along the way. She is only human after all. Her work with 6 year old Sheila in One Child was an inspiration to me on personal and professional levels and continues to be to this day.


Who was your favorite “good guy” in The Rembrandt Affair and why?

It is cliché to name the main character, I know, but I can't resist. Gabriel Allon won me over in the first Daniel Silva book I read, and he continued to do so in The Rembrandt Affair. He is not only remarkably good at his job, but he is also loyal to his friends. He will risk his own life to make sure all of the people on his team make it home alive.


All of the technology discussed in the novel is real. Does any of it surprise you?

Perhaps because I had already heard of much of the technology described in the book before, it came as no surprise. I also know how meticulous Daniel Silva can be about the details he puts into his books. While his books are fictional on many levels, he does strive for a certain amount of accuracy as well.


What celebrity would play Gabriel Allon if The Rembrandt Affair were on the big screen?

My least favorite question to have to answer under any circumstances! I am not good at selecting actors for roles in the books I read. I would really rather picture them as I see them in my own imagination. The first name that comes to mind if pushed is Eric Bana, who also starred in Munich. Perhaps that is a bit of typecasting on my part though. I loved him in Munich, although I think he's a bit taller and not quite the same physical build as I have in mind for Gabriel Allon. Or what about Joe Manganiello? He's a bit young for the role and he would have to wear contacts, but it might work.


Which fellow book-loving, blogging friend do you think would enjoy THE REMBRANDT AFFAIR?

The publisher has been kind enough to offer a free finished copy to a fellow blogger. I immediately thought of Sandy from You've GOTTA Read This! as she enjoys a good mystery, and, like me, has a special interest in reading more about the Holocaust. I hope she will enjoy this one as much as I did!

You can learn more about Daniel Silva, and his books on the author's website. Be sure and check the TLC Book Tours website for other tour stops as well.