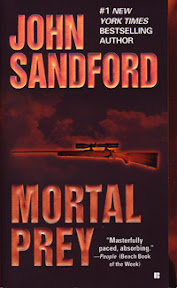 The thought popped into her head as she lay in the soft-washed yellowed sheets in the hospital bed. The thought popped in between the gas pains and muscle spasms, through the pungent odor of alcohol swabs, and if she'd read the thought in a book, she might have smiled at it.

I recently joined a group on GoodReads called Comfort Reads. The definition of a comfort read varies from person to person, I'm sure we can all agree. What I turn to for comfort may not be what you turn to. One of my most favorite comfort type reads are crime fiction novels. Give me high suspense, a puzzle to solve, good versus evil, and a character or two I can root for, and I'm content for hours.

For years I have been wanting to try John Sanford's series featuring Lucas Davenport, but, for whatever reason, it's taken me this long to finally get around to giving one of Sanford's books a try. Sometimes I use book tours as an excuse to finally get around to reading books or authors I want to read but just haven't been able to, and that's exactly what I did in this case. And while I would have preferred to start with book one in the series, that was already taken. I picked a book at random, knowing each of the books in the Prey series stand alone. Wouldn't you know it though, I pick a book that appears to feature a character that most likely appeared in a previous book. Even so, I had a blast reading Mortal Prey. It's the ultimate comfort book: smart, entertaining and suspenseful. I can't wait to read more in the series. This time though, I'll start with the first book in the series. 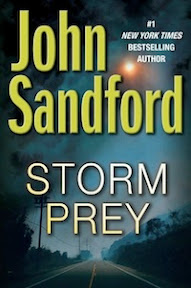 As part of the TLC Book Tour, each of the participants signed up to read one book out of the series and answer a questionnaire, creating a time-line of Lucas Davenport's life and career. For old fans, it's a great way to recap the series leading up to the newest release, Storm Prey, which is due out in stores this month. Those of us who are new to the series get a little taste of what we can expect from the series with a limited fear of spoilers.


Tell us about Lucas Davenport:

Lucas is well known for his luck. And while he may get lucky from time to time during an investigation, it is his skill and brain power that really help him get the job done. While he may be into fast expensive cars and fancy suits, he is an every day man who works best independently but also knows how to be a team player, putting his resources to good use.


What is Lucas doing when he first appears in the book? Set up the scene.

Lucas arrives on the scene in his Porsche, parking on the street near his house. He surveys the progress of the construction to rebuild his home, making note of what hasn't yet been done and how many workers are actually working. When the call comes in from a friend in the FBI, Lucas is in no rush to return it. His mind is consumed by thoughts of the construction of his house as well as his upcoming nuptials. The last thing he needs is to be pulled away, but his fiancée convinces him it's best if he takes a break and gets out of town for a short while for her own peace of mind.


Give us a sense of time and place.

The novel opens in beautiful Cancún, present day, as a woman lies in a hospital bed, recovering from a gunshot wound that took the life of her unborn baby. Soon, she is on the run, headed to California and then across the country to St. Louis, Missouri. Lucas Davenport is soon on his way to St. Louis too where he'll take to the streets in search of a killer. The summer heat is almost too much to bear and Lucas longs for Minneapolis.

Lucus is the Deputy Police Chief in Minneapolis. An election is looming and it appears he is on his way out.

Lucas is engaged to Weather, who is pregnant with his child. They are in the throes of planning a wedding at the start of the book.


Lucas Davenport is a known clothes-horse; did you notice any special fashion references?

He definitely has an eye for fashion and likes expensive suits, particularly Italian ones.


Let’s talk about the mystery: Avoiding spoilers, what was the crime/case being solved?

An old nemesis comes out of hiding after an attempt on her life and the murder of her boyfriend and unborn baby. She's bent on revenge, targeting those she believes are behind the hit. Lucas joins the FBI in the investigation to find and stop her. She does not make an easy catch, however as her skills as a hit-woman are matched by none. Her targets don't make it easy either, each of them with their own secrets and connections, not wanting to acknowledge their association with a hired gun.

Does the title of your book relate to the crime?

Very much so. The body count is high in Mortal Prey, not to mention the villain demonstrates just how mortal her prey are. It's all about life and death in this book.


Who was your favorite supporting character, good or evil?

Clara Rinker (who is outed as the villain very early on in the book) made for a complex and capable foe. She is always one or two steps ahead of the police and FBI. Even Lucas begrudgingly likes the woman, sympathizing with her for all she's had to endure and admiring her skill, even all the while knowing she has to be stopped.


What was your favorite scene?

I especially liked how Lucas turned to the locals to aid in the hunt for Clara, a source the FBI overlooked as they scrambled to find any leads they could that might help them catch a killer.


Finally, how do you envision Lucas Davenport? If he were to be portrayed in a movie, what celebrity would play him? 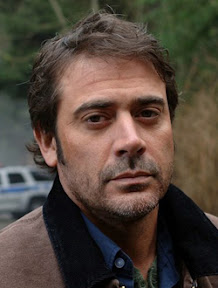 I confess that I am no good at naming celebrities who could play characters in a movie version of a book. If I had my druthers, lesser known actors would be given the roles. Less chance of the celebrity getting in the way of a good character. I really can't think of an actor that fits my image of Lucas Davenport. Kathleen's choice of George Clooney comes close. There is also Jen's idea of Russell Crowe. I think I have to go with Jeffrey Dean Morgan, however. Picture him as more the John Winchester version (Supernatural) rather than the Denny Duquette version (Grey's Anatomy).

Be sure to check out the other stops on this tour:

Monday, May 3rd:
Rules of Prey: Rundpinne
Shadow Prey: Boarding in my Forties

You can learn more about John Sanford and his books on the author's website. The Penguin Group website offers excerpts of all the Prey novels for a sneak peek. Be sure and check the TLC Book Tours website as well.


Thank you to all who entered the giveaway and shared with me what your favorite type of comfort reads are. I hope to do a post summing up your responses soon. Now for the winner of the giveaway, chosen at random through random.org:

Lisa from Minds Alive on the Shelves!
Kirsten wins a copy of Mortal Prey as well as an ARC of Storm Prey.