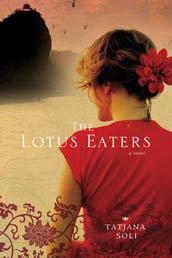 Helen picked her way back home using the less traveled streets and alleys, avoiding the larger thoroughfares such as Nguyen Hue, where trouble was likely. When she first came to Saigon, full of the country's history from books, it had struck her out little any of the Americans knew or cared about the country, how they traveled the same streets day after day - Nguyen Huge, Hai Ba Trung, Le Loi - with no idea that these were the names of Vietnamese war heroes who rose up against foreign invaders. That was the experience of Vietnam: things in plain view, their meaning visible only to the initiated. [pg 7]

I watched the film The Hurt Locker recently. I have had difficulty putting my thoughts onto paper about it and so you haven't seen a review. One thing in particular that stood out for me, however, was the scene where Staff Sergeant James is grocery shopping, followed by a scene of him trying to talk to his wife about his experiences in the Iraq War as she prepares a meal. These are very revealing scenes. The soldier goes from intense and life threatening situations in Iraq to the every day monotony of life back home. His wife is not able to understand what he has been through, everything he has seen.

The violence and shared horrors, the adrenalin rush, the camaraderie and strong bonds that form between the soldiers, and the sense of duty and honor . . . War can change a person. It can make adjusting to home life upon return difficult. It is not uncommon for soldiers to return to battle even when they don't have to. Some feel most comfortable there in a way many of us who haven't experienced it can't even begin to understand. I thought of this as I read The Lotus Eaters. A different war, a different time period. A novel about photojournalists rather than a movie about soldiers. The pull of war, of danger, seduces some almost like a drug. It makes the title of Tatjana Soli's novel all the more fitting.

I was drawn to Soli's The Lotus Eaters because of the setting. The novel is set in Vietnam during the Vietnam War. It is the story of an American female photojournalist, Helen Adams, who is set on following in her father and brother's footsteps, wanting to know how her brother died and to experience some of what he must have as a soldier in the Vietnam War. It is also the story of Linh, a Vietnamese man who has lost everything and who is doing what he can to survive. And then there is Sam Darrow, an American photojournalist whose entire life is wrapped up in shooting wars.

The novel opens as Helen is making her way home to her apartment in Saigon where Linh, bedridden and in need of medical care, is waiting. The Americans are fleeing the city as the Communists take over, the final sign of a war lost. Helen struggles with whether to leave with Linh or stay to see the changeover first hand, capturing it on film. Her decision made, the novel, and her thoughts, shift to the past and the reader is taken to the moment she first arrived in Saigon and from there her story and that of Linh's and Darrow's unfold.

I fell in love with this novel from the very first word. My biggest regret is that I read the novel without my reading journal handy and so my notes are few, and I don't have a record of the many quotations that especially moved me. The author's writing is beautiful. There was a melancholy and underlying tension about it which helped to create the tone of the novel. None of the characters in the novel are perfect, each one flawed and multi-faceted. They are tormented but driven, eager but at times reluctant.

Helen changes quite a bit during her time in Vietnam. She arrives as a naive young woman, eager to make a name for herself and prove she can hold her own in a man's world. She has her work cut out for her and, even at her most fearful, she is courageous. As the novel progresses, Helen grows stronger and wiser but there is a recklessness there too, much like that of veteran photographer, Darrow, who finds comfort and meaning in war. He sees something in Helen, a hint himself in his younger years, but also someone who may finally be his match.

Linh's story intrigued me. He is Darrow's assistant and proves to be an invaluable companion. He is the biggest mystery of all throughout the novel, but as his personal story unfolds, I was even more drawn to him, and I couldn't help but wish I had known him in real life.

Through the author's words and the characters' eyes, I could understand their love/hate relationship with Vietnam. It is a beautiful country. The Vietnamese people were tenacious and adaptable. They had to be given the circumstances of the country's history. The author's knowledge and interest in Vietnam shined through on every page. She included a bibliography at the end of the book for those interested in reading more about the country. While her story is fiction, there is truth woven in. Soli did not take sides but presented a realistic and complicated picture of events in Vietnam at the time.

The Lotus Eaters is beautiful, dark, and thought provoking. War is cruel and Soli does not hold back from sharing the ugly side of it. Within it too, however, are sparks of humanity and compassion. The author does not leave that out either. In fact, it is often those moments, that help Helen through the darker moments. The Lotus Eaters is an amazing novel: a love story just as much as it is about the Vietnam War and the impact war can have on those touched by it. After having just finished it, I am still hesitant to pick up another book, still caught in its spell.
Rating:

You can learn more about Tatjana Soli and her book on the author's website. Be sure and check the TLC Book Tours website as well.

Tuesday, April 6th: One Person’s Journey Through a World of Books