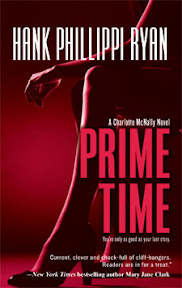 
Journalism in its written form has always interested me. Maybe I feel a kinship still from my days of working on the middle school newspaper or when I was a part-time receptionist for a small town newspaper one summer during college (it was my favorite job right after working in the university library). Some of my favorite crime fiction authors were journalists, Michael Connelly and Karen E. Olson, for example. And so when I was offered the opportunity to try television's investigative reporter Hank Ryan Phillippi's series, I admit to being more than curious. Going into the series, I honestly did not know much about what went on behind the scenes of a local news station. I couldn't wait to find out--even if it was through fiction.

Between the hot flashes, the hangover and all the spam on my computer, there's no way I'll get anything done before eight o'clock this morning. I came in early to get ahead and already I'm behind. [pg 7, Prime Time]

Charlie McNally is a 46 year old award winning investigative reporter in Boston. In a career where your face and age can mean everything, Charlie has to prove herself at every turn in an already extremely competitive field. Once she has caught the scent of a good story she is dogged in her research and will risk life and limb to get it. She has a top notch producer by her side who is with her at every turn.

In Prime Time, Charlie must come up with a big story for November sweeps or risk losing her job to someone younger who they only have to pay half as much. A possible story falls into their laps when a widow agrees to do an interview with the news station after news of her missing husband's death comes out. It isn't until that interview that Charlie learns the deceased had sent her an e-mail seeking her help before his death. Two other people received the same e-mail, a private school literature teacher and another man who no one seems to know. Meanwhile, Charlie begins looking closer at the spam that is filling her e-mail in-box. Some of the spam is different than the rest. The further Charlie gets in her investigation, the more it looks like something shady is going on in the corporate world--and it involves a lot of money and possibly murder.

The author takes the reader behind the scenes of the news stations: touching on the deadlines, station politics, and the attempt to balance ratings with journalism. Charlie knows some of the assignments she is given can be exploitative, but it is clear that Charlie has integrity. I loved reading about Franklin and Charlie in action as they put what seemed like random information together and began piecing it together. The final outcome was satisfying.

Prime Time gets Ryan's series off to a running start. It is an entertaining and a quick read. Charlie's sense of humor adds to the levity of the crime at hand and a little romance completes the package.

Author Hank Phillippi Ryan picks up again with Charlotte McNally in Face Time. Summer sweeps are fast approaching and Charlie and her producer Franklin think they may have their next big story. A woman who confessed to killing her husband three years before may actually be innocent. New evidence uncovered suggests as much; however, Charlie has her work cut out for her when the woman she is trying to get out of prison is not willing to cooperate with her investigation. What does she have to hide? Is she trying to protect her daughter who had been the only other one in the home at the time of murder? Adding to that complication is the fact that the prosecuting attorney, now the Attorney General, who put the woman behind bars is running for governor. If it comes to light that his investigation was at all corrupted, it could mean the end of his political career. Charlie's curiosity and determination to get her story earn her as many enemies as it does friends. The more she digs, the more bodies turn up, and it looks like Charlie herself may be a target.

It's statistically impossible that my mother is always right, so why doesn't she seem to know it? [pg 7, Face Time]

As an aside to the main story line involving the murder investigation, the author also touches on the topic of mother/daughter relationships. Charlie has a good but sometimes strained relationship with her mother who never seems quite satisfied with her daughter's lifestyle. She finds that looking at her own relationship with her mother can be helpful to her investigation of the story, trying to understand the dynamics between the mother who is had been convicted of murdering her husband and the daughter. In a different kind of mother/daughter relationship, Charlie meets her boyfriend's 8-year-old daughter for the first time. Finding a way to connect to the girl proves to be a bit of a challenge.

In the second novel in the series, Charlie continues to struggle with the fact that she is getting older in a job where being young is an asset. Her mother has just had cosmetic surgery and Charlie wonders if perhaps she should too. The author paints a realistic impression of what it must be like for women in the television field.

I wasn't as enamored with Face Time as I was with the first book in the series, perhaps because the story was a tad predictable. That said, there are still enough twists that kept me on my toes, and I enjoyed getting to know Charlie even more. I just love Franklin and do hope to see more of him in the books to come.

Both Prime Time and Face Time can be read as stand alones or as a series. Prime Time offers more of a introduction to the main characters and their relationships than Face Time, and so it might be a good idea to start there if you are a reader who likes to follow the character back-stories in chronological order. However, the author did a very good job of not revealing the mystery from the first book in the second (it was touched on, but in vague terms), so if you are concerned about spoilers, don't be.

Stay tuned because I will be reviewing Air Time and Drive Time by Hank Phillippi Ryan!

Check out the author's website for more information about her books.