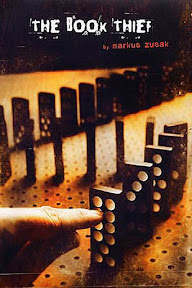 Once, words had rendered Liesel useless, but now, when she sat on the floor, with the mayor’s wife at her husband’s desk, she felt an innate sense of power. It happened every time she deciphered a new word or pieced together a sentence. [pg 147]

From the Publisher: It’s just a small story really, about among other things: a girl, some words, an accordionist, some fanatical Germans, a Jewish fist-fighter, and quite a lot of thievery. . . .

Set during World War II in Germany, Markus Zusak’s groundbreaking new novel is the story of Liesel Meminger, a foster girl living outside of Munich. Liesel scratches out a meager existence for herself by stealing when she encounters something she can’t resist–books. With the help of her accordion-playing foster father, she learns to read and shares her stolen books with her neighbors during bombing raids as well as with the Jewish man hidden in her basement before he is marched to Dachau.

I am at a loss for words. I began reading The Book Thief on Sunday and finished it on Monday. Admittedly I was motivated to try and squeeze it in before the end of the year as my last pick for the War Through the Generations: WWII Challenge, but I truly was swept away by the book from the very first page. After I finished the book, I told my husband there was no way I could review it. What could I say besides that it's brilliant? The writing, the characters, the presentation of the story--every word of it is just plain brilliant. I suddenly understand why so many people gush over this book. And now it's my turn.

* * * A SMALL PIECE OF TRUTH * * *
I do not carry a sickle or scythe.
I only wear a hooded black robe when it's cold.
And I don't have those skull-like
facial features you seem to enjoy
pinning on me from a distance. You
want to know what I truly look like?
I'll help you out. Find yourself
a mirror while I continue. [pg 307]
The novel is narrated by an unusual character, that of Death. Death offers a different perspective than a human would have. He is straight forward with his insights into the human condition, sometimes to the point of being blunt; and while his position offers him some detachment, he is at the same time drawn to humans and their stories, as he is in the case of Liesel Meminger.

Death is telling a story that happened in the past and as such offers spoilers along the way. This may be disconcerting to some, but I found the foreshadowing comforting in this case. It seems fitting given how omnipresent Death is. And like Death, I have always been more interested in the process, the chain of events leading up to something, than the ending itself (hence my enjoying a mystery even though I can see the ending coming a mile away). Death is not impartial despite what he wants the reader to believe, however. There is a hint of bitterness behind some of his statements, but he also has a heart, even if he is himself not human.

The characters are fully fleshed out, even the minor characters. The author makes their weaknesses and strengths clear. And these come out all the more fully in their interactions with one another and their relationships. The main character, Liesel, has suffered much loss in her young life. She is nine when she comes to live with her foster parents. Her foster mother is a bit rough around the edges and takes a little getting used to, but she has a big heart. Liesel takes to her foster father right away; he teaches her almost immediately how to roll a cigarette. He also is the one who teaches her to read and encourages her interest in books. Also among my favorites are the neighbor boy, Rudy, who becomes Liesel's best friend, the mayor's wife with the big library, and Max, the Jewish man hiding from the Nazis.

While a heartbreaking and brutal story at times, this is also a novel of hope and resilience. It demonstrates the ugly side of humanity as well as the beautiful. The evil of the Holocaust and the actions of the Nazis during World War II are well known. Set in a German town outside of Munich, The Book Thief offers the reader a glimpse of what life was like for the average (non-Jewish) German during that time in history. Liesel and her friends are members of the Hitler Youth, a requirement for children her age. There are book burnings, war rations and air raids. As the Jewish prisoners are paraded through the town on their way to the concentration camp Dachau, the town folk flock to the main street to watch. Complacency was all too common during that time period, whether out of fear or hate. Those who did intervene were beaten and often punished for reaching out to help.

The power of words is a strong theme throughout the novel. The first book Liesel steals is one she finds in a graveyard after the death of her brother. She has no idea what the book is about, being that she is unable to read. Somehow she knows, however, that the book is a treasure worth keeping close. It would be the first of many books that she would steal, earning her the title of the book thief.

It was through words that Adolf Hitler and his followers perpetuated the prejudice and hate against the Jewish people, spurring the violence on. It was with words that Liesel left marks on the mayor's wife out of anger. But it was also words that comforted during the air raids and soothed the injured soul. Words brought friends together and words that empowered a little girl, giving her courage and strength.

The writing is beautiful, almost poetic. There is a certain rhythm to Death's narration. The book may be long but I savored every word. I even found myself rereading passages not because I didn't understand them, but because I wanted to re-experience the words, feel them in my mind and taste them on my tongue.

Markus Zusak's The Book Thief one of those books that will haunt me for a long while. So much for being at a loss for words, eh?


For more information about the author and his books, visit his website

Book Source: I bought this book in November of 2008 through Amazon.

Challenge Commitment Fulfilled: War Through the Generations: WWII Challenge
[Note: Thanks to everyone who participated in my survey to decide what my last book for this challenge would be. I went with the book that got the most votes, which was The Book Thief.]
© 2009, Wendy Runyon of Musings of a Bookish Kitty. All Rights Reserved.
If you're reading this on a site other than Musings of a Bookish Kitty or Wendy's feed, be aware that this post has been stolen and is used without permission.
Posted by Literary Feline at 12/29/2009 12:00:00 AM