Monday At the Movies: Sunshine Cleaning

Monday's Movie is hosted by Sheri at A Novel Menagerie.
As I was browsing through the list of movies out in theaters this weekend, nothing stood out. At least, not until I came across a listing for Sunshine Cleaning, a movie I had been wanting to see since I first saw it advertised late last year. It meant my husband and I had to drive a little farther to a theater that was playing it, but that was okay. Sunday stretched out before us, and we had no other plans.

Rose Lorkowski (Amy Adams) is a single mother, supporting her young son. In high school, she had been the head cheerleader and dated the star football player. Now she works as a maid, and finds herself cleaning the house of one of her former classmates. She struggles with feelings of self-worth as she balances work, motherhood, and a dead end relationship. When Rose's son is kicked out of public school, Rose decides to open her own crime scene clean up service in order to raise money to get her son into private school. Rose's sister, Norah (Emily Blunt), whose own life is muddled and off track, reluctantly agrees to help her sister with the business, having just lost her own job as a waitress. The two sisters settle into their new career choice, cleaning up the messes left behind by others while, at the same time, trying to get their own lives on track.

Sunshine Cleaning is a quirky dark comedy that is more complex than it may appear on the surface. The movie had me laughing in spots and tearing up in others. The entire cast does an amazing job, including Amy Adams, Emily Blunt and Alan Arkin who plays the sisters' father. Adams' and Blunt's performances came across as raw and genuine. 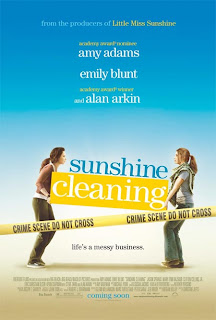 I have read a lot of criticism about how this movie is a lesser Little Miss Sunshine, and I have to disagree. The two movies may have some similarities, but overall, they are completely different. Sunshine Cleaning stands just fine on its own. Sunshine Cleaning does tackle quite a few issues, some are resolved more fully in others. And that's okay. This is the sort of movie that is best left with certain questions left in the air or else it would not seem quite so real.