Persuasion (quoted directly from The Free Dictionary by Farlex):

1. The act of persuading or the state of being persuaded.
2. The ability or power to persuade.
3. A strongly held opinion; a conviction.
4. a. A body of religious beliefs
b. A party, faction, or group holding to a particular set of ideas or beliefs. 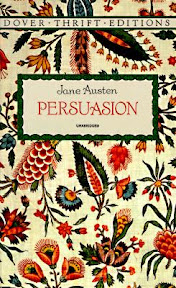 
First Sentence: Sir Walter Elliot, of Kellynch Hall, in Somersetshire, was a man who, for his own amusement, never took up any book but the Baronetage, there he found occupation for an idle hour, and consolation in a distressed one; there his faculties were roused into admiration and respect, by contemplating the limited remnant of the earliest patents; there any unwelcome sensations, arising from domestic affairs, changed naturally into pity and contempt, as he turned over the almost endless creations of the last century—and there, if every other leaf were powerless, he cold read his own history with an interest to which never failed—this was the page at which the favourite volume always opened:

ELLIOT OF KELLYNCH HALL.
Reason for Reading: This is my 2nd selection for the Saturday Review of Books Challenge (recommended by Barbara H), my 2nd for the Classics Challenge, and my 1st for the Book to Movie Challenge. This is my third Jane Austen novel. I have also read Pride and Prejudice and Emma, both of which I thoroughly enjoyed.

Comments: Jane Austen's novels are comfort reads for me, I'm discovering. I can see myself reading and rereading them time and time again. Heck, I've read Pride and Prejudice a couple of times--and rereading books for me is rare. I love the banter between the characters and Jane Austen's style of writing. Her stories are relatively simple on the surface and yet meaningful and complex upon closer examination. Persuasion proved true to form.

On the surface, Persuasion is a love story but digging a little deeper, it is a novel that touches on the classism and elitism of the times. The novel also captures the different definitions of persuasion and questions its importance and value in every day life.

Anne Elliot is one of three sisters, her father being Sir Walter Elliot of Kellynch Hall. Facing hard times, Sir Elliot and his eldest daughter, Elizabeth, agree that a move a smaller home in Bath would be the best solution, and so they make arrangements to let their family home in Somersetshire to the respectable Admiral Croft and his wife.

The eldest Elliot daughter is Elizabeth, who took on the role of the lady of the house upon her mother’s death during the sisters’ childhood. She and her father are very close, relying on each other’s confidence and advice. Elizabeth and Sir Elliot share many of the same prejudices and opinions of those they think are beneath them. Neither pays much attention or puts much stock in the usefulness of Anne herself. Mary, the youngest of the Elliot children, is married to Charles Musgrove, a person whom Elizabeth in particular feels is beneath their family. Mary proves to be a bit of a hypochondriac and is quick to find fault with her situation and those around her. This in part stems from her own insecurities no doubt.

Another major player in Anne’s life, the one with the most influence over her is the widow Lady Russell. It was Lady Russell’s opinion that in the end persuaded Anne against marrying Captain Wentworth when first Anne and he met and enjoyed a brief romance. Lady Russell as well as Sir Elliot and Elizabeth felt that Frederick Wentworth was below Anne, not worthy of her hand in marriage. He owned no land, had not enough money, seemed not to be well-connected and appeared to have little to offer. It was with great sadness and broken hearts on both sides that the two parted.

And yet they would meet again several years later when Admiral Croft, his wife, Sophia, and Sophia’s brother, Captain Wentworth, visit the Musgroves, where Anne is staying for a couple of months to be near her sister, Mary and her family. Frederick’s anger and frustration toward Anne is renewed, and Anne more fully realizes what a mistake she made in letting herself be persuaded out of marrying the only man she has ever loved. In typical Austen fashion, the story is not so simple as that. Both have won the affections of others and their own feelings may not ever be reconciled with the other.

Anne is often lauded as the best liked of the Austen heroines. Her gentle nature, intelligence, practical attitude and thoughtfulness quickly won me over. She lacks a bit of the spirit that Lizzy and Emma, two other of Jane Austen’s heroines, share, however, that is in no way a bad thing. For Anne is her own person and earns her place as a heroine to be admired on other accounts.

I very much enjoyed Persuasion and can see why it is a favorite among Jane Austen fans. As the last book ever written by Jane Austen, and published posthumously by her brother, Persuasion is a fine farewell for an author who has a true gift for storytelling and getting her message across.

Favorite Parts: There were many parts of this novel that I enjoyed, including the way Anne took over when Louisa Musgrove was hurt in Lyme, the discussion between Mary and her husband over which of the Musgrove sisters Frederick liked most, and the banter between Frederick and his sister as they argued over whether women belong on ships or not.

Anne by far was my favorite character. I could relate to her on many levels, sharing many of her values and ideals—and even some of her faults.

Miscellaneous: We went to see Rush Hour 3 this past Monday. It was a fun movie to watch, nothing special or memorable. It was a way to stay out of this humid and hot weather we’ve been having.

Now I am anxiously awaiting the movie version of Persuasion (the one starring Amanda Root) to arrive in the mail from Netflix. Hurry, hurry, hurry!
Posted by Literary Feline at 9/05/2007 08:51:00 PM