Review of Lost to Them by Gaytri Saggar 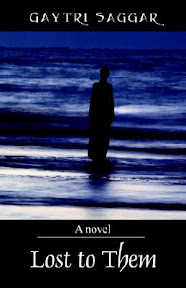 First Sentence: “Shh” murmured Ramu to himself as he bent down and straightened the brass vase he had knocked down.

Reason for Reading: I was selected to review this particular book for Front Street Reviews. It particularly caught my attention because of the setting and cultural aspects the novel promised to explore.

Comments: The Kaushal family is a wealthy one, running a successful estate in Kaushalpur, India. While the males straddle both traditional and Western cultures, the females lead a more traditional existence. When young Yash first approaches his father in 1924 about his desire to travel to Africa to explore more of the world, the elder Kuashal at first refuses to let him go. Yash is permitted to go with the promise that he will return from his trip and accept an arranged marriage with Gauri. He is accompanied by one of the estate’s employees, Nath, who is of a lower caste. The two men become instant friends on their journey.

Both Nath and Yash settle in Kenya with their families, establishing a happy and prosperous existence for themselves. After sixteen years of marriage, Yash and Gauri finally have children of their own, a beautiful girl named Selina and the youngest, a son called Nikki. Growing up in Africa and in a wealthy family, the children, especially Selina, are afforded more freedom than most Indian children. Although raised in many of the traditional ways, Selina cannot help but be influenced by the Western culture as well.

By introducing readers to the Kaushal family, author Gaytri Saggar offers a generational view that helps cast light onto Selina’s story. The family’s background, origins, beliefs and choices in life have all played a part in the events that are to follow, however, it dragged the book down and almost had me stop reading because it was so dry. After finishing the book, it seems as if I had read two different books: the history of the Kaushal family and then Selina’s story, which was a much more interesting and heartfelt story.

The cultural divide between her own and that of the white community was not as obvious to her as it becomes that fateful day that Selina falls head over heels in love with Dirk Willers, an English businessman, nine years her senior. Selina decides their relationship is best kept a secret for the time being. Prejudice and family duty are not so easy to overcome, especially amidst the political and economic upheaval in a country seeking it’s own independence where suddenly roles and status come into question. Selina and Dirk only want to be together and hope their love is enough to survive the obstacles they face.

Selina is a character that lives and breathes. She was raised and taught to have an open mind and yet that was challenged within her family and society. Selina was vulnerable and had to fight to be strong, a quality often too easily bestowed on main characters in novels, making them slightly less real. Selina’s flaws made her human. I did have one particular concern about her character, however. To mention it here would pose too much of a spoiler.

In what at first appears to be a conventional love story about two people from two very different backgrounds, author Gaytri Saggar offers readers so much more. Lost to Them is not such a simple novel. It touches on subjects of the heart, the tug of war between the heart and family duty that can result when cultures collide, the pain of betrayal, and an undying hope. Gaytri Saggar’s novel, Lost to Them, is a poignant tale that will leave the reader’s heart aching; and, for me at least, wanting a bit more resolution.

Favorite Part: The novel took off at about the time Selina decides to return to Kenya from England. It was impossible to put the book down from that point on.
Posted by Literary Feline at 11/30/2006 10:45:00 PM