Review of The Hunt by Allison Brennan 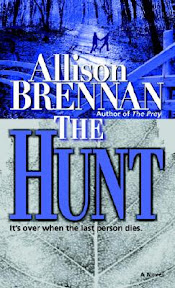 Reason for Reading: I found this title among the Curledup.com review offerings and the book sounded like something I might enjoy. I’d seen the author’s name mentioned favorably in some of my reading groups.

Comments: Author Allison Brennan has written a fast paced novel that will have readers sitting on the edge of their seats. The Hunt offers thrills as well as a little romance on the side. Twelve years ago, Miranda Moore escaped certain death at the hands of a serial killer. Her best friend, Sharon, was not so lucky, gunned down as the girls fled for their lives. Miranda more than proved herself as courageous at the time, leading the investigators, including FBI agent Quincy Peterson to the cabin where she and Sharon had been held captive and tortured for several days before the killer set them free so he could go on the hunt.

Now the head of the local search and rescue division, Miranda and the local authorities are on the trail of her captor once again. Nicknamed the Butcher, he has proven he is a cold and ruthless killer; torturing, raping and hunting his victims before he murders them. Miranda is the only one who ever got away. Sheriff Nick Thomas calls in the FBI, requesting the help of an old friend, Quincy Peterson, when a young woman is found dead in the forest.

Miranda, Nick and Quinn share a past not so easily put behind them. Miranda has mixed feelings about seeing her old lover, Quinn, again. It was because of him that she failed in her attempt to join the FBI nearly a decade before. Quinn never stopped loving Miranda. And then there is Nick, who had once wanted nothing more than to capture Miranda’s heart. Despite the tangle of feelings between them, they must set their personal feelings aside when another woman turns up missing.

It has been over 12 years, seven known victims, with at least nine young women missing in the Bozeman area of Montana. With the media and politicians breathing down their necks, the pressure to catch the Butcher intensifies. They decide to track the killer by going back into the past, searching for a pattern and hoping the possible suspects from the first murder, that of Penny Thompson, reveal something that had not been uncovered all those years before.

Miranda has built her life around staying in control, proving that she’s a survivor and not a victim. The ghosts of the past haunt her no less, especially with the discovery of the Butcher’s latest victim. Allison Brennan has created a character who is not only a strong, intelligent and independent lead character, but also one with a vulnerability that cannot help but to touch the reader’s heart. The two men in her life, Nick and Quinn, love Miranda and want to protect her, but neither wants to hold her back.

Although the identity of the Butcher remains a mystery for most of the novel, he makes several appearances throughout, allowing the reader into his thoughts and past. His own childhood was one full of abuse and pain, which turned into hate and anger, surfacing into the violence he wreaks on his victims.

Just as the title indicates, The Hunt describes the final game the Butcher plays with his victims, as well as the hunt for him by Miranda and the authorities. It’s a race against time—one of life and death for all those involved. Allison Brennan has crafted an entertaining and gripping novel, tempered with a touch of romance that will have readers racing to the end to see who comes out on top. Originally published on Curled Up With A Good Book at www.curledup.com. © Wendy Runyon, 2006

Favorite Part: The pecan pie scene was probably my second favorite scene. My first favorite scene would be too much of a spoiler to mention here, although I guess I could go so far as to say in involved a confrontation.

I liked that the main character was smart—not your typical heroine who gets in over her head because she is so stubborn (not that Miranda isn’t stubborn . . .). The men who loved her weren’t overbearing or too protective of her, worrying about her, but not trying to control her.

Miscellaneous: I read this book in manuscript form that I don’t recommend for the average reader. I think it took a little longer to get into because of the format—my editor’s hat went on automatically, and I had a hard time setting that aside to enjoy the book for what it was.
Posted by Literary Feline at 11/26/2006 09:04:00 PM