Weekly Mews: September Heat Wave (Be sure to vote in this month's TBR Poll!)

I am linking up to the Sunday Post hosted by Kim of Caffeinated Book Reviewer and The Sunday Salon (TSS) hosted by Deb Nance of Readerbuzz  where participants recap our week, talk about what we are reading, share any new books that have come our way, and whatever else we want to talk about. I am also linking It's Monday! What Are you Reading? hosted by Kathryn of Book Date where readers talk about what they have been, are and will be reading.
I am linking up Stacking the Shelves hosted by Marlene of Reading Reality a meme in which participants share what new books came their way recently.

How are you today? I had to take my daughter in for a blood test this morning (thank goodness the doctor requested it to be done stat because the wait would have been horrendous) and we followed it up with a visit to Barnes and Noble. That seems to be where we end up after every visit to the doctor's. We made it home before it got too hot outside. While we had a rather mild summer compared to past summers (high 90's instead of triple digit temperatures), this week we have been hit with a heat wave with temperatures over 100F. I think the hottest day this week was 107F. In my office building, however, it was sweater weather. Not that I am complaining. I am very grateful for the air conditioning.
I had not planned to stay away from blogging for so long, but life got in the way in more ways than one. It has been a rough several months, but things are looking up--or so I hope--and hopefully I can find my blogging (and reading) rhythm again soon.

Read Recently
Bait and Witch (Witch Way Librarian #1) by Angela M. Sanders was a fun paranormal cozy mystery and the book that gave me hope I was coming out of my reading slump. I should have picked up the next in the series, but instead decided to read Karen Heuler's The Splendid City, which I considered setting aside several times. I just was not enjoying it as much as I hoped I would. The ending was satisfying though, and so I am glad I stuck with it--mostly, anyway. After that I hemmed and hawed over what to read, nothing really catching my fancy. I finally decided to go with a couple of my favorite authors, husband and wife writing team, Ilona Andrews. I flew through Burn For Me, the first in their Hidden Legacy urban fantasy series.
My husband, daughter and I are enjoying reading the manga series, Uncle From Another World by Hotondoshindeiru I am behind everyone else in house admittedly, but I am liking it so far. 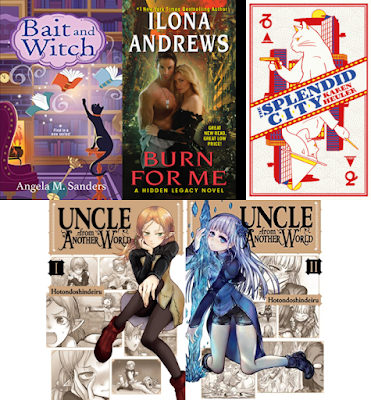 What did you recently finish reading?

Reading Now
At the moment, I am reading Amari and the Night Brothers (Supernatural Investigations #1) by B. B. Alston. I am not too far in, but it's so good already! I hope I can talk Mouse into reading it. I think she would enjoy it too. I am also reading White Hot (Hidden Legacy #2) by Ilona Andrews because why mess with a good reading streak? 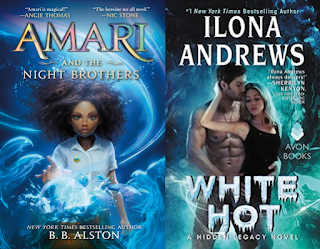 Up Next
I could use your help in choosing my next read! When I mentioned to my husband that I have found some relief to my reading slump by returning to old favorite authors of mine, he suggested this month's TBR List poll theme could include the next books in favorite series I have been neglecting. I thought that was a great idea--of course, narrowing it down to just three was next to impossible, but I tried! Which of these three books do you think I should read next? 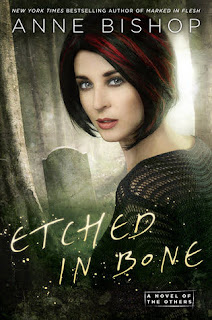 Etched in Bone (Others #5) by Anne Bishop

New York Times bestselling author Anne Bishop returns to her world of the Others, as humans struggle to survive in the shadow of shapeshifters and vampires far more powerful than themselves…

After a human uprising was brutally put down by the Elders—a primitive and lethal form of the Others—the few cities left under human control are far-flung. And the people within them now know to fear the no-man’s-land beyond their borders—and the darkness…

As some communities struggle to rebuild, Lakeside Courtyard has emerged relatively unscathed, though Simon Wolfgard, its wolf shifter leader, and blood prophet Meg Corbyn must work with the human pack to maintain the fragile peace. But all their efforts are threatened when Lieutenant Montgomery’s shady brother arrives, looking for a free ride and easy pickings.

With the humans on guard against one of their own, tensions rise, drawing the attention of the Elders, who are curious about the effect such an insignificant predator can have on a pack. But Meg knows the dangers, for she has seen in the cards how it will all end—with her standing beside a grave. [Goodreads Summary] 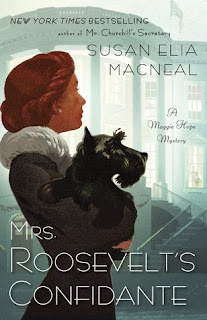 In this riveting mystery from Susan Elia MacNeal, England’s most daring spy, Maggie Hope, travels across the pond to America, where a looming scandal poses a grave threat to the White House and the Allied cause.

December 1941. Soon after the attack on Pearl Harbor, Winston Churchill arrives in Washington, D.C., along with special agent Maggie Hope. Posing as his typist, she is accompanying the prime minister as he meets with President Roosevelt to negotiate the United States’ entry into World War II. When one of the First Lady’s aides is mysteriously murdered, Maggie is quickly drawn into Mrs. Roosevelt’s inner circle—as ER herself is implicated in the crime. Maggie knows she must keep the investigation quiet, so she employs her unparalleled skills at code breaking and espionage to figure out who would target Mrs. Roosevelt, and why. What Maggie uncovers is a shocking conspiracy that could jeopardize American support for the war and leave the fate of the world hanging dangerously in the balance. [Goodreads Summary] 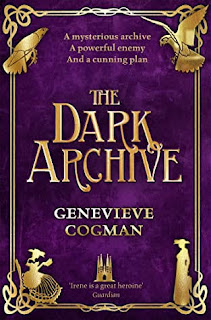 The Dark Archive (The Invisible Library #7) by Genevieve Cogman
A professional spy for a mysterious Library which harvests fiction from different realities, Irene faces a series of assassination attempts that threaten to destroy her and everything she has worked for.

Irene is teaching her new assistant the fundamentals of a Librarian's job, and finding that training a young Fae is more difficult than she expected. But when they both narrowly avoid getting killed in an assassination attempt, she decides that learning by doing is the only option they have left - especially when the assassins keep coming for them, and for Irene's other friends as well...

In order to protect themselves, Irene and her friends must do what they do best: search for information to defeat the overwhelming threat they face and identify their unseen enemy. To do that, Irene will have to delve deeper into her own history than she ever has before, face an ancient foe, and uncover secrets that will change her life and the course of the Library forever. [Goodreads Summary]


Thank you for voting! What will you be reading next? 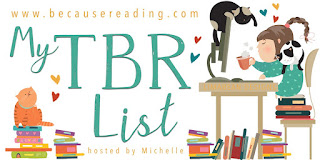 My TBR List is hosted by the awesome Michelle at Because Reading. It’s a fun way to choose a book from your TBR pile to read. The 1st Saturday of every month, I will list 3 books I am considering reading and let you vote for my next read during that month. My review will follow (unfortunately, not likely in the same month, but eventually--that's all I can promise).

What I Have Been Watching
My family and I have been putting on an episode of Star Trek: Discovery most evenings. We are well into the second season now. The show has a great cast, and although I am not an original Star Trek fan, it's been fun to pick out the Easter eggs that pop up now and then. We also are watching the latest Marvel series, She-Hulk. I loved Tatiana Maslany in Orphan Black and was eager to see how she would do in her new role. I was a little leery after seeing the trailer for She-Hulk initially, but I think both my husband and I are enjoying the show more than we expected. I know not everyone appreciates it, but I like that all these Marvel shows are so different from one another in style and genre-mix. I talked my husband into watching the first episode of the Lord of the Rings: The Rings of Power series, and we plan to watch the next when it comes out.
Since we are reading the manga series Uncle From Another World, we have also been watching the anime series. Anjin and Mouse are much more into anime than I am, but occasionally they tempt me. Mouse talked me into watching Demon Slayer with her last month. We just started the second season (which first came out as a movie but was broken up into episodes to create the series).  Mouse also introduced me recently to Fruits Basket, which I may have to watch more of.
We ventured out to the movie theater for the first time in a couple or so years and saw DC League of Superpets at Mouse's request. I was kind of hoping she would pick Thor or Top Gun, but no such luck. The film turned out to be really cute though, and we all had a good time. I had forgotten how expensive going to the movies could be! 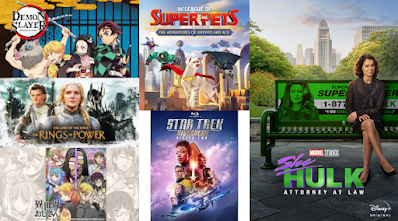 What have you watched recently?

New to the Shelves
Mouse and I added more books to our bookshelves recently.  Let's take a look! 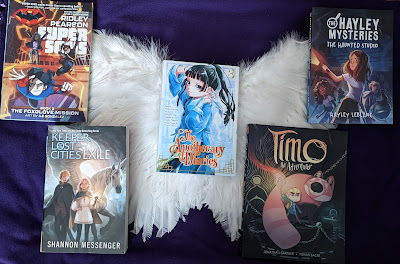 Mouse's Loot
Super Sons: The Foxglove Mission by Ridley Pearson
The Keeper of the Lost Cities: Exile (Volume 2) by Shannon Messenger
The Apothecary Diaries #3 by Natsu Hyuuga
The Haunted Studio (The Hayley Mysteries #1) by Hayley LeBlanc
Timo the Adventurer by Jonathan Garnier 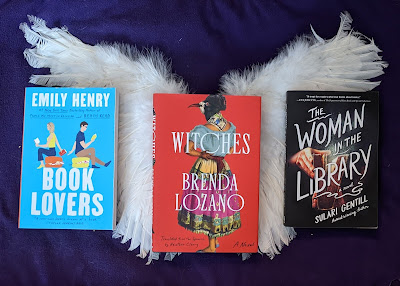 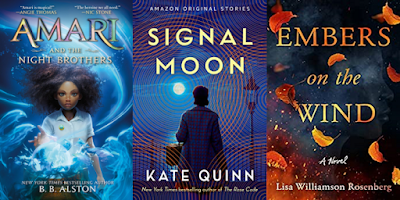 Amari and the Night Brothers (Supernatural Investigations #1) by B. B. AlstonSignal Moon: A Short Story by Kate Quinn
Embers on the Wind by Lisa Williamson Rosenberg
What new books made it onto your shelf recently?
I hope you have a great week and month of September! Let me know what you have been reading and watching!