My Bookish Mewsings: An Easy Death / A Longer Fall / Stars Beyond 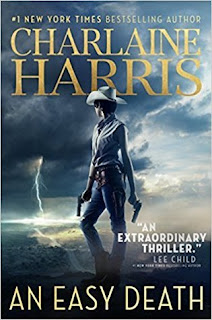 In the morning I got Chrissie to cut off all my hair. ~ Opening of An Easy Death
An Easy Death (Gunnie Rose, #1) by Charlaine Harris
Gallery/Saga, 22018
Fantasy/Alternate History; 321 pgs
Source: Purchased
There was no question I would read Charlaine Harris’s Gunnie Rose series when the first book came out, having read and enjoyed some of the author’s previous work. I eagerly dived into An Easy Death and followed it up not long after with A Longer Fall, the second book in the series. The series is set in the Southwest with an alternate history timeline. The Great Depression and the assassination of Franklin Roosevelt resulted in a fractured the United States that broke off into several different countries.
In An Easy Death, Gunslinger Lizbeth Rose is hired as guide and protection by two wizards searching for a man they believe can save the life of their tsar—or at least his blood can. Lizbeth Rose does not trust anyone who can wield magic, but she is desperate for work and money. High in action and lots of magic with a bit of romance, I was immediately drawn into the novel. Gunnie Rose may be a bit rough around the edges, but she’s sharp and thinks quickly on her feet. I liked her right away. The author’s world building is top-notch. It has a definite Old West vibe to it with a mix of the modern. Loving all things magic, I was especially interested in Eli and Paulina, the two wizards who had hired Gunnie Rose. Both were interesting characters in their own rights. Will I read the next book in the series? Absolutely! 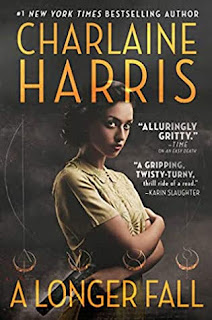 It had been a long time since I was on a train, and I found I hadn't missed it a bit. ~ Opening of A Longer Fall
A Longer Fall (Gunnie Rose, #2) by Charlaine Harris
Gallery/Saga, 2020
Fantasy/Alternate History; 304 pgs
Source: NetGalley for an honest review
Lizbeth Rose is hired to be part of a new crew in A Longer Fall with a mission to protect a crate as it is transported into the state of Dixie, once a part of the United States—and the last place Gunnie Rose wants to go. Of course, everything goes wrong on the mission when the crate is stolen, and Gunnie Rose teams up with an old friend to attempt to retrieve it. A Longer Fall has a slightly different feel to it than the first book in the series. This second book is set almost entirely in Dixie. Dixie has a different set of rules than Gunnie Rose is used to. White supremacy runs rampant, and there is a definite hierarchy in terms of race and gender. Jim Crow Laws evidently still apply. I did cringe near the end. White Savior-ism rears its ugly head, which is my only complaint about the novel. Although I ultimately liked An Easy Death more, A Longer Fall was quite the page turner, and I enjoyed it overall. There was plenty of action and magic with bit of romance. The world building continues to be superb. 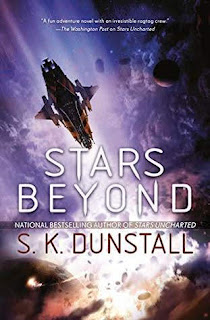 It might have been coincidence--the chairman of Eaglehawk Company standing in the foyer of the Grande Hotel, watching the news vid on the three-floor-high screen--but Leonard Wickmore didn't believe in coincidence. ~ Opening of Stars Beyond
Stars Beyond (Stars Uncharted, #2) by S.K. Dunstall
Ace, 2020
Science Fiction; 416 pgs
Source: NetGalley for an honest review
I fell in love with the the first book, Stars Uncharted, and the world building, and eagerly dove into Stars Beyond, which takes us deeper into the world sister-writing team S.K. Dunstall has created. The reader steps right back into the lives of the Another Road crew, who have barely escaped with their lives in the previous novel. In a new and better armed spaceship, the crew is still on the run from the corrupt Department of Justice agents and the company men tracking them. Captain Roystan's memory is shot and his health is deteriorating. Genemodder Nika must get that new genenod machine she's ordered, not mention find more of the transurides, if she hopes to save him. It seems simple enough. Until it isn't. A company general is bent on getting his hands on genemod apprentice Bertram Snowshoe; the evil and cruel company man Wickmore will stop at nothing to get his hands on Nika; and Agent McAlister is after Nika too, but for his own desperate reasons.
High in tension and suspense, Stars Beyond does not disappoint.  Nika Rik Terri and Josune continue to be my favorite characters in the series, both resourceful and skilled in their crafts. I would not have minded more Josune in the novel though. I continue to be impressed with S.K. Dunstall's world building and the complexity and nuances of the world and characters they have created.