Bookish Thoughts: The Girl From the Savoy by Hazel Gaynor

In my heart, I always knew he would go; that they would all go, in the end. ~ Opening of The Girl From the Savoy 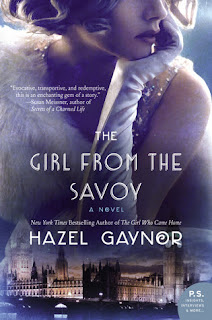 The Girl From the Savoy by Hazel Gaynor
William Morrow, 2016
Fiction (Historical); 419 pgs

The Girl From the Savoy is the first historical fiction novel I have read solely written by Hazel Gaynor. I adored her and Heather Webb’s The Last Christmas in Paris and knew I wanted to read more by both authors. While I enjoy historical fiction quite a bit, I often skip over the ones featuring characters trying to break into show business. Maybe because I live too close to Hollywood and stories like that are a dime a dozen. But this was Hazel Gaynor. And sometimes a story like that actually does catch my eye like this one did, especially when it is tied to a World War or tackles a subject I am particularly interested in.

Dolly Lane has long dreamed of a life dancing on stage, and hopes taking a job at one of the most prestigious hotels in London will bring her closer to making that dream come true. She is immediately taken in by the glamour and vitality of the environment she finds herself in, serving the wealthy, powerful and famous. On impulse, Dolly responds to an advertisement of a songwriter looking for a muse, not quite sure what to expect. Suddenly, she is rubbing elbows with the likes of the famous actress Loretta Mae and her brother, Perry. They have the life she wants and aspires to, and it is impossible not to be swept up in their world.

Below that surface, however, is a past Dolly cannot quite let go of: the boyfriend she loved with all her heart whose war experience has left him broken, and a her own secrets which carries and is trying to run from. Then there is Perry and his growing affection for Dolly, which is hampered by his love for the woman who got away and his time and memories of the Great War. He came back a different man, pained by things he had done, unable to forgive himself. Loretta Mae, too, has her own secrets—that of illness and long lost love. And then there is Teddy, Dolly’s former love who struggles with Post Traumatic Stress Disorder (obviously not called that in the 1920’s). There is one scene in the novel that particularly had me in tears and still gets me teary-eyed when I think about it. It is in the final scene in the hospital as Teddy regains his memories (minor spoiler: and watches his favorite nurse walk away. That moment! It was heartbreaking, but it was also the moment I joined Team Teddy, even as much as I liked Perry too.). All these tragedies have shaped the characters into who they became, and I could not help but fall in love with each one of them, wanting for them all to have their happy endings even when that was not possible. The stories of the minor characters are just as compelling, especially the women who work with Dolly at the Savoy. The Savoy itself is a character. What it must have been like during that time! Dolly, Loretta Mae, and Teddy are given a voice in the novel, the chapters alternating between each of the characters, and it is through their eyes we learn about their pasts and present. There is a nice juxtaposition between Loretta Mae and Dolly’s stories—how similar and different they are.

I took my time reading The Girl From the Savoy, immersing myself in the writing and the lives of the characters. Every time I settled in to read the novel, I was immediately swept up into the world Gaynor created. It is rich in detail and complexity. There is much more to the novel that what may at first it may appear to be on the surface. From the discussions about the war experience, something that is not glossed over, and in fact is laid bare as to its impact on those who lived through it, as well classism between the working class and the wealthy. Gaynor does not shy away from taking on gender roles either, including entitlement of men over women, especially those with less advantage. We see this both between maid and employer as well as in the show business realm when a person of influence has all the power to make or break dreams of a young girl. This is also a novel about death, grieving--both life and what was or could have been--and forgiving oneself and others. As someone who has mixed feelings about love triangles—this novel has two—I tend to base my opinion on how it all turns out in the end more often than not. Not exactly objective, I know. I felt that in both cases the love triangles played out well and fit with the characters, although I admit to wishing things could have been a bit different for a couple of the characters. Kudos to the author though for staying true to her characters!

I came away from The Girl From the Savoy in awe of Hazel Gaynor’s ability to draw me in so completely to the world she’s created and the lives of her characters. There was the occasional moment of things falling a little too easily into place for Dolly and at times the pacing of the novel seemed a bit slower than I might have liked. Those are minor complaints on my part though and rather subjective. Ultimately, I found The Girl From the Savoy to be an enjoyable read, and I look forward to reading more by the author. Thank you to those who voted for this one in my April TBR List Poll!