Bookish Thoughts: A Murder for the Books by Victoria Gilbert

Anyone who claims there are no stupid questions has never worked in a public library. ~ Opening of A Murder for the Books 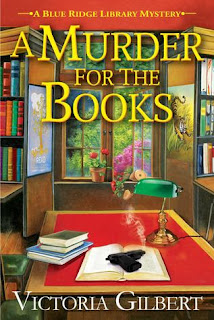 I went from liking cozies somewhat to loving them in the last couple years. So many good ones have come out. Or maybe it is just me and my reading mood, and cozies are appealing to me more and more. Thank you to everyone who voted for A Murder for the Books in my May TBR List poll. I enjoyed my time in Taylorsford, Virginia with Amy Webber and her aunt. This particular mystery held a double appeal for me. Not only did it have a modern murder that needed solving, but also an old one. I do love a good (or sordid) family secret!

Our heroine Amy Webber is manager of the local public library, having moved to Taylorsford with her aunt who has been having health issues. One day her handsome new next-door neighbor, Richard Muir, stops by the library to do some research on his family history, hoping to clear the name of the woman whom his great uncle loved, accused of murdering her husband in 1825. She may have been acquitted, but the town folk never believed it. While showing Richard the way to the archives, she never expects to find a body just inside. While the police begin to investigate the more recent murder, Amy and Richard begin digging into the past, finding more than they bargained for. Could a conspiracy be involved? Could the present day murder be tied to events the pair have uncovered about the past; secrets someone(s) wanted to keep buried?

Amy is a very relatable character, a plus-sized librarian, who is witty and smart. She’s come out of a bad relationship and is a little wary of starting a new one, and so when Richard makes his interest known, Amy finds herself backpedaling fast. I liked seeing their relationship evolve over the course of the novel. Richard is a choreographer and dancer who teaches dance at a university. I do think he moved a bit fast for comfort (and so did Amy), but I did like Richard. He comes with his own broken heart story, which plays nicely into the novel. I liked how supportive he is of Amy and tackles her concerns head on while at the same time being willing to give her the space she needs.

Some of the more minor characters are worth noting as well. Oh, I do hope Sunshine, Amy's library assistant, runs for mayor! And I just love Amy’s Aunt Lydia. There is also the mysterious and intimidating Paul Dassin who definitely does not seem to be on the up and up.

This was such an entertaining novel. Amy comes into the present day murder investigation naturally and it never felt as if I had to suspend my disbelief to buy why she was involved. Victoria Gilbert has created a rich history for her characters, especially their ancestors. I liked that Amy’s own family was tied into it all, and not always in a favorable light. Some may be put off by the romance thread that runs throughout the story, but I did not mind it. Sometimes a side dish of romance does a mystery good. While the mystery itself was not that hard to figure out—the whodunit and why—I really enjoyed my time spent getting from the beginning to the end. I would love to spend more time with Amy.