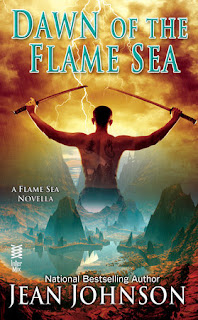 Dawn of the Flame Sea (Flame Seas, #1) by Jean Johnson
Intermix, 2016
Fantasy; 130 pages
Source: I purchased a copy of this book for my reading pleasure.

Opening Sentence: Energy shimmered into view, at first forming a single rippling, wavering line, then splitting and curving into an arch.

They call themselves the Fae Rii, or Fair Traders. Elfin-like beings capable of wielding sophisticated forms of magic, they travel between universes exploring new worlds and establishing settlements for their people to live peacefully among the locals.

The humans of the White Sands tribe, refugees fleeing from powerful enemies, see the Fae as potential invaders stealing their newfound natural resources. Jintaya, the leader of the Fae travelers, manages to forge an alliance, promising to trade skills and knowledge—magical and otherwise—to build a lasting community.


I purchased the first in the series, Dawn of the Flame Sea, quite a while ago and admit to forgetting it was on my e-reader. From the synopsis of the book, it is about the fae, however, which is probably why the series initially caught my attention.

I was quite taken with the world building in this series. Dawn of the Flame Sea walks readers through the two groups finding a way to live together. The White Sands Tribe is fascinated by the magical abilities of the Fae Rii—their ability to shape stone and their environment to best meet their needs. The natives have their own way of using the magic on the planet, but it is a very careful and measured practice done only by their shaman. The tribes of the planet are quite primitive (Bronze Age, I believe), and it is not surprising that some look to the Fae Rii as gods, something the Fae try hard to discourage. While things seem to work out well in terms of the two groups coming together and finding a way to live together, they are not without their troubles. The tribe that had forced the White Sands Tribe off their own land is stalking them, wanting to kill them off and steal their resources.

While I appreciated the author’s detail and care in creating the world her characters lived in, I felt it was at times at the expense of the character development. I wanted less description of the macro scope of the development of their community and more focus on a select few individual characters. Ban, an immortal human who had been taken in by the Fae long before their coming to the new planet, is such an interesting character, and likely my favorite in the book. he is scarred, having seen much more than anyone can imagine. I couldn’t help but be more curious about his past and his relationship with the Fae leader, who herself was a bit of a mystery.

I admit I started to get bored about a third of the way in.  I kept hoping things would speed up the closer the enemy Circle Fire Tribe got to the settlement.  I wish I could say that the book did get better for me, but ultimately, I was disappointed. 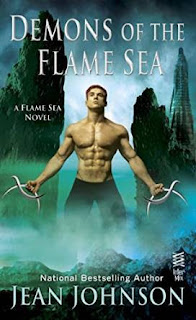 Opening Sentence: Old Nandjed didn't do much weaving anymore; her age-gnarled fingers had lost most of their dexterity.

Raised to understand and control advanced magics, the Fae Rii know they must be careful with the wild, abundant energies of their new desert homeland. They must also downplay the awe they inspire in the Bronze Age humans around them. Still, they have managed to create some equilibrium between the two factions, primitive versus advanced—at least, until new outworlders arrive, tipping the scales out of balance.

Strict and power-hungry, the ruthless Efrijt take the phrase “deal with the devil” to a new level. A treaty may be possible; however, the solution proposed will in turn give birth to a new problem: A chaos that will dance its way through all three races trying to survive in the burning heat of the Flame Sea…


I was interested enough in the characters and world to continue with the series, and I was curious to see if the second book in the series would pick up. In some respects it did. It is still not a fast paced book. The Fae Rii are peace loving outlanders and will try to find peaceful solutions to every conflict. During one of his expeditions on the planet, the immortal Ban comes across a village in which another outlander group has settled, the Efrijit. Ban has a history with the Efrijit and does not trust them. They are extremely manipulative and take advantage of others weaknesses to profit. The Efrijit had not realized the Fae Rii had laid claim to the planet before them, and insist that they have every right to be there. They are using the local tribe as labor, mining for a liquid that is poisonous to all but the Efrijit. It is making the laborers sick as a result of close and prolonged exposure. The former White Sands Tribe, now known as the Flame Sea Tribe, along with the Fae Rii, enter into negotiations with the Efrijit to determine who has the right to claim the land and its resources. The Efrijits are not known to play nice, and so the others must stay on their toes.

There were some tense moments in Demons of the Flame Sea as the Fae Rii were only able to call in for limited help due to a major event occurring on their home planet. All portals to other settlements must be closed, cutting off communication with their home. It was interesting to see the politics at play between the Fae and the Efrijits.

I felt I got to know some of the individual characters better in this second novel of the series, which was good. The reader gets a closer look at Ban's relationship with the Fae Rii leader, which is a bit complicated given both their backgrounds. There is definite mutual respect between the two characters. I lost count of the number of times Ban "dies" and comes back to life in this one--although more from accidents while on his expedition than in battle.

The book dragged in spots, and I found my attention wandering, like with the first book. I wanted to like these books more than I did, but I found them lacking--of what, I am not sure exactly. More excitement and action? More character development? Perhaps a more compelling story? More something, anyway. In the end, I finished the novel knowing it would be my last in the series. I just do not care enough to go on, although I think some might find this series to their liking.