The sweet blood has changed things. ~ Opening of Marked in Flesh 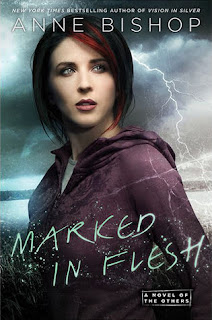 Marked in Flesh (Others, #4) by Anne Bishop
Roc, 2016
Fantasy; 399 pgs
Source: Copy provided by the publisher via NetGalley for an honest review.

Considering this is the fourth book in a series I have come to love, it is sad that I kept finding reasons to put off reading it. I still have one more book to go with these characters, and I will be sad to say goodbye. I have really grown fond of the characters and the world author Anne Bishop has created.

Tensions are high in Marked in Flesh as everything comes to a head. The Humans First and Last organization has organized an all-out assault on the Others, hoping to take over their lands completely. These humans, however, seem to have forgotten the past, and the strength and power that the indigenous races wield. The leaders of the Lakeside Courtyard have been tasked with defining the value of humans—and what—or who to save.

Marked in Flesh feels very much like a final book in a series in many ways. Everything that has been building over the last three books comes to a head in this one. The day of reckoning has arrived. The focus of this book is less on Meg and Simon, although they have parts to play in the story as well. I liked that Bishop gave us more insight into some of the outer settlements and their residents. Much time is spent in describing the preparations the settlers, both Others and humans, make in anticipation of what is to come. Meg is tasked with coming up with a list of things humans need to survive—or don’t want to give up. In part to keep her busy, I think. There are two other cassandra sangues whose visions play an important role in the novel. The need to cut to see visions has always bothered me a bit given cutting is a real problem in our own society, and I worry about it being glamourized in any way. I do not feel Bishop does that at all, mind you, but the risk is there just the same.

I just love Meg and Simon. I sometimes think Meg is underestimated in her abilities to protect and take care of herself, but she definitely brings out the protectiveness in just about everyone she meets. I really like that Anne Bishop never quite lets us forget that Simon is not even part human, even though he sometimes acts and looks human. He is in a difficult place as leader of the Lakeside Courtyard, brokering peace between his own kind and that of humans. It is no wonder he sometimes questions whether he is becoming too much like a human. I like that Meg likes him just the way he is. She has suffered enough in human hands, so it really is no wonder. I know a lot of fans of the series have been disappointed by the lack of romance, when it is so obvious Meg and Simon have feelings for each other. It has not really bothered me much though—maybe because that has not been my own focus in the series.

It is hard not to talk about spoilers when writing a review of a book in a series, but I am trying. So, I apologize for the vagueness of this review. Like with its predecessors, Bishop continues to amaze me with the depth of world building she has put into this series. In some ways, it is hard, too, not to compare it to the climate of our own world today—past and present.

In a book like this, there is bound to be death—and yes, that was tough. There is plenty of action and drama. If I had one complaint about this book, it is that so much is going on and there are just so many characters . . . I would have loved to spend more time in the different settlements, getting to know the characters there a little better. Perhaps we will see more of them in the future!

To learn more about author Anne Bishop and her work, please visit the author's website. You can also find her Goodreads.