The Summer King knelt before her. ~ Opening of Wicked Lovely 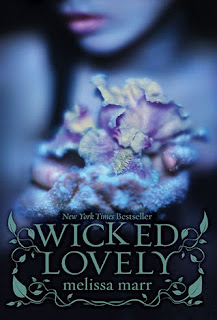 Wicked Lovely (Wicked Lovely, #1) by Melissa Marr
HarperTeen, 2007
Fantasy/YA; 328 pgs
Source: I own two copies of this book, one in print and one in e-form.

Imagine going your entire life having to pretend you cannot see an entire segment of society because to acknowledge them could be detrimental. Imagine being one of very few humans who can actually see them or know of their existence. Aislinn, or Ash as she prefers to be called, wishes she could not see them and that she was not privy to their very existence. There are three basic rules her grandmother has ingrained in her: “Don’t stare at invisible faeries”; “Don’t speak to invisible faeries”; and “Don’t ever attract their attention.”

Ash had followed the rules very closely all her life, but when Keenan, the Summer King, sets his sights on her, all of those rules fall apart. As Ash, helped by her best friend Seth, attempts to sidestep the King at every turn, Keenan’s pursuit of her intensifies. He must find his queen and defeat the Winter Queen who holds all the power and is upsetting the balance.

Melissa Marr has created a world that I instantly found myself transported to. The fae of her world are both charming and terrifying. They are mischievous and playful as well as cruel and powerful. To draw the eye of the King of Summer means the end of one’s human life as she knows it.

For all his charm and good looks, it took me a while to warm to Keenan. The more I learned about him and his predicament, the more I sympathized with him and his situation. He really is a nice person at heart, with the best of intentions. He is used to getting his way, and isn’t sure what to make of Ash, who seems to thwart his every attempt to romance her. He comes to see it as a challenge, and a sign that she truly is meant to be the Summer Queen.

Ash, who is used to trying to hiding her ability to see the faeries, is rightfully scared when she realizes all the precautions she’s taken are no longer working. She is my kind of heroine though—resourceful and smart.

I appreciated how quickly Seth came to believe Ash’s assertions about the faeries living among them, despite his not being able to see them. While in other cases I might find it too convenient, in this instance, I felt it fitting. It spoke to Seth’s devotion to Ash.

I most felt for Donia though, the human who had given her life to be with Keenan, only to be felled by the Winter Queen’s curse. Even above Ash, Seth, and Keenan, I found her to the most interesting character—and probably my favorite. There is a bit of mystery and power about her. She is the underdog who should not be underestimated.

It is obvious from the start that Ash has a crush on Seth, and he on her, despite her protestations that they are just friends. If I had to complain about anything in the book, it would be that Ash ignored the signs as long as she did. For those who do not like love triangles (I rolled my eyes at the thought about this coming into play in this one too), I feel it is worth it to continue anyway. I really liked the way everything played out in the end in that regard.

In case you get the impression this book is all romance, it is far from it. The struggle between the Summer King and the Winter Queen is quite intense, and Ash finds herself right in the middle of it all. It was hard to tear myself away from the book because I had to know how everything would play out.

Wicked Lovely reads much like how I imagine Marr’s faery world—a dash of comedy, a dollop of romance, all swirled in with the darker elements. I loved the author’s imagery of winter and summer in their fae forms, especially when the Summer King and Winter Queen were around. I found this first book in the trilogy to be entertaining and thrilling. I look forward to reading the next book in the series. Thank you to all who voted for Wicked Lovely in my January TBR List Poll!

To learn more about Melissa Marr and her work, please visit the author on the her website and onTwitter.