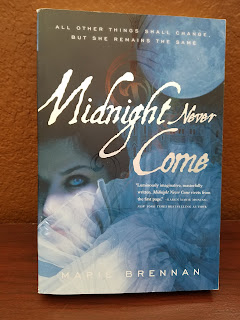 
England flourishes under the hand of its Virgin Queen: Elizabeth, Gloriana, last and most powerful of the Tudor monarchs.

A breathtaking novel of intrigue and betrayal set in Elizabethan England; Midnight Never Come seamlessly weaves together history and the fantastic to dazzling effect.


How I got it: A holiday gift swap

Why I want to read it: I love the genre and novels featuring the fae. Not to mention Marie Brennan is an author I have been wanting to read for ages now. Her books come highly recommended, and I love the sound of them.

Have you read this book? If so, what did you think? Should I move it up in my TBR pile?