Deborah Birch is a seasoned hospice nurse whose daily work requires courage and compassion. ~ Opening of The Hummingbird 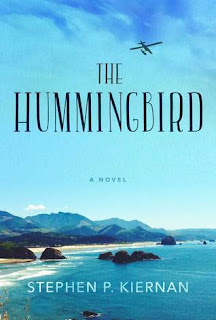 Once a well-respected history professor who was brought down by an academic scandal, Barclay Reed does not have long to live. Hospice worker, Deborah Porter, is a registered nurse assigned to care for him, one of many hospice nurses in a few short weeks. Deborah proves to be a good match for the cantankerous elderly man. She takes comfort in her work. Her home life is in turmoil. Her husband is home after his third tour of duty in Iraq and has come back a changed man. Deborah desperately wants to help her husband, but doesn't know how.

As Professor Reed and Deborah grow closer, she longs to know more about Professor Reed's past; what exactly happened to make him a pariah in the academic world? When Professor Reed learns of Deborah's home situation, he strikes a deal with her. He will tell her a story, the story that ended his career, if she will read his manuscript to him one last time. Within that manuscript, he assures her, she may find answers to help her on the home front.

Professor Reed has no one. He has burned his bridges and is dying alone. He is not an easy man to like or get to know. Deborah hopes that in his final days, he is able to make peace with his past and himself. Through the sharing of his research and final manuscript with her and her sharing her own story with him, perhaps he will be able to.

The novel alternates between Deborah's perspective and Professor Reed's manuscript. Stephen P. Kiernan effectively uses a story within a story through Professor Reed's manuscript to tell the story of a Japanese fighter pilot, Ichiro Soga, during World War II whose mission was to target strategic locations over the United States mainland. His is a tale of courage and hope, themes that carry over into Deborah's own story.

I took an instant liking to Deborah. I once considered going into hospice care as a career. Deborah is a fully realized character, as is her husband, Michael, and Professor Reed. She is dedicated to her job, in helping not only her patients, but also their families, through one of the most difficult times in their lives. She helps the dying find peace.

Deborah's husband, Michael, has come back a little more changed each time he returns from military duty in Iraq. This third time, he seems like an entirely different person. He is withdrawn, on edge, easy to anger, and at times violent. He has lost interest in all that he once loved, including, it would seem, Deborah. As someone who helps others for a living, Deborah wants only to help her husband, only, she isn't sure how. Everything she tries seems to fail. I felt for both Michael and Deborah. Deborah's love for her husband, her feelings of helplessness, and Michael's anger and fear are all so palatable.

The Hummingbird turned out to be an emotional read for me, striking a personal chord. Although he fought in a different war and I never knew him before it, the effects of the war on my father were noticeable. I saw bits of my father in Michael. I also saw him in Barclay Reed, from his love for history, particularly World War II, to his dying. This is one of those novels I wish I could push on my dad--I think he would have liked it. Most of all, I wish he was around so we could talk about it together.

Healing and forgiveness are at the center of this novel as it deals with the difficult topics of war and dying. Stephan P. Kiernan expertly takes three seemingly different stories, one from the past and two from the present, and weaves them together. The Hummingbird is an emotional and thought provoking novel that will resonant with many readers.

To learn more about Stephen Kiernan and his work, please visit the author's website and Facebook page.