I can walk through a house once and know more about its occupants than a psychiatrist could after a year of sessions. ~ First Sentence of The Good House 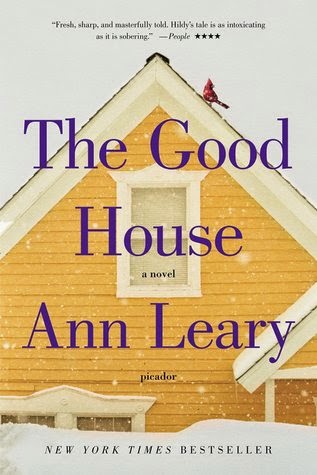 Ann Leary's The Good House tells the story of Hildy Good, who lives in a small town on Boston’s North Shore. Hildy is a successful real-estate broker, good neighbor, mother, and grandmother. She’s also a raging alcoholic. Hildy’s family held an intervention for her about a year before this story takes place—“if they invite you over for dinner, and it’s not a major holiday,” she advises “run for your life” — and now she feels lonely and unjustly persecuted. She has also fooled herself into thinking that moderation is the key to her drinking problem.

Where to begin?  Should I tell you how much I liked this book?  I thought the author, Ann Leary, did an amazing job in capturing Hildy's voice and letting the reader experience exactly what Hildy was going through as the novel went on--without having to tell the reader directly.  For the writing alone, I give this book an A+.

On a more personal note, I found an eerie similarity between Hildy's character and my father, both in attitude, rationalizations, and drinking problem.  As a result, this book touched close to home.  Instead of dredging up old memories and feeling overly emotional, however, I found myself laughing out loud (and wondering if I was a bad person for doing so) and at the same time feeling sad for Hildy.  Sad at how alone she was.  Sad she was unable to recognize the seriousness of her drinking problem.  And sad for how out of control her life was even despite her attempts at trying to control it.  I admit I sat on the edge of my seat for most of this book, knowing, just knowing, something bad was going to happen.  While this book isn't one I would label a thriller, it certainly has some of the elements of a thriller in terms of suspense.  Or maybe that was just me.

The reader learns more about Hildy and why she turned to alcohol to numb her troubles over the course of the novel, from the death of her mother to her divorce to recent events.  Hildy is a private business woman, a realtor, competing in a corporate world, where even the business of real estate has become a big box store kind of business.  I was glad the author addressed that issue, as I think it is a reality many face today.  It's yet another stressor in her life that Hildy tries hard to fight against and cope with.

Hildy is an unreliable narrator to be sure. Written in first person, the reader is inside Hildy's head, only able to see and hear her own thoughts about those around her.  Hildy shows great insight at times, but at others a total lack there of. I think, however, we get a good feel for the town and the people in Hildy's life in what Hildy shares with us--and what she doesn't.  Hildy is the gatekeeper of secrets, it would seem, and boy, does she know some juicy ones!

Some of the major players in the novel, other than Hildy, is her newest friend Rebecca, an unhappy wife and mother, who is fairly new to town.  Rebecca is the first person Hildy feels she can be real with, even when it comes to her continued drinking, which everyone thinks she's given up.  Rebecca has her own problems, of course, including having fallen in love with the local psychiatrist.  Then there is Peter, the psychiatrist, who I never quite got a good handle on.  Oh, and Frank.  I really liked Frank.  And I hated the way Hildy treated him at times.  He and she had been an item in her late teen years, before Hildy went off to college and got married.

As with Hildy and her struggle to stay afloat business wise, the author delves into life in a small rather wealthy town, in which old and new money mix, where life time residents and newbies find a way to co-exist.  There are interesting dynamics at play as a result.  I was especially drawn to Cassie's family, and her son Jake who had special needs.  They are clearly not a family of means, but they have long been in their home, and now need to find a way out in order for Jake to attend a better school in a different town.  I confess I was not a big Hildy fan, but I did have a lot of respect for the efforts she made to help Cassie's family.  Even if she told herself she was doing it for the sale, it showed a more compassionate side of Hildy that was too often lacking in her character.

The Good House was an interesting read on many levels.  I went into the novel not really knowing what to expect, and what I found was an entertaining and thought provoking novel.  There is an air of mystery about it, a building of tension that rivals the best thrillers, and psychological insights into the impact of secrets and alcohol abuse has on oneself and those around us.  I thoroughly enjoyed this novel.

You can learn more about Ann Leary and her books on the author's website.