Insurgent: One choice can destroy you. Veronica Roth's second #1 New York Times bestseller continues the dystopian thrill ride. As war surges in the factions all around her, Tris attempts to save those she loves—and herself—while grappling with haunting questions of grief and forgiveness, identity and loyalty, politics and love.

Allegiant: The explosive conclusion to Veronica Roth's #1 New York Times bestselling Divergent trilogy reveals the secrets of the dystopian world that has captivated millions of readers in Divergent and Insurgent.

A part of me was reluctant to start the Divergent series, but I also really wanted to read it before seeing the first movie.  Young Adult novels are hit and miss with me, and, while I often enjoy them, I find them lacking more often than not.  It's more a matter of taste, I think, on my part. Still, I have read enough that I enjoy to keep reading the genre.

I am keeping my thoughts about Insurgent and Allegiant brief and down to just general impressions in order to avoid any major spoilers. 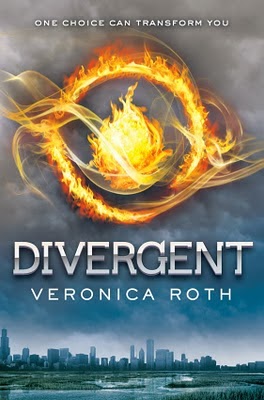 There is one mirror in my house. ~ First Sentence of Divergent

Everyone in society is divided into factions.  Each of the factions are based on a particular value and has its place in society.  The idea is to maintain peace and order among the people.  There are the Erudite who seek knowledge; the Candor faction in which everyone values honesty above all else; the Dauntless who guard and protect the city; and Abnegation, which is made up of people who value selflessness and the only ones trusted to run the government as a result.

Beatrice Prior was born in the Abnegation faction and has tried all her life to be selfless.  That is what she is supposed to be after all.  When the results of her faction test come back as inconclusive, Beatrice is put in a very difficult position.  She has just discovered she is Divergent which marks her as different and not of one faction like everyone else.  It is something she needs to keep a secret or else it could mean her life.  Someone is trying to kill the Divergent population, and soon Beatrice realizes she is not alone.

What follows is a story about identity and finding one's own path.  It is a coming of age story at its most basic level.  Beatrice, aka Tris, is just beginning to really define herself and she comes up against some very real obstacles that even young people of our world face--questioning authority, reality versus the ideal, discovering who she is, bullying, and finding first love.

The novel itself is quite entertaining, and I really grew to like Tris.  She is a strong female character with a good head on her shoulders.  I also really liked her friends, including Four, who I found mysterious and charming at first.  The more I got to know him, the less of a mystery he became, but I grew to have a lot of respect for him.  I found myself wishing I could be in the pages of the novel, a part of the world Veronica Roth created, if only for an instant.

I absolutely loved Divergent.  I found the world created by Veronica Roth interesting in all its complexity, the story intense, and the characters endearing--well, some of them anyway.  The novel is action packed and heartbreaking, while, at the same time, an interesting study on society.  Despite its size, the novel is a fast read, and I raced through it.  I enjoyed it so much that I rushed right into Insurgent and then followed that up with Allegiant. I also read a couple of the short stories related to the trilogy in between, which were just okay.  I think it was more a case of my not being a big fan of re-tellings of the same story or scene from another perspective (in this case Four's).

I thoroughly enjoyed the Divergent movie when I saw it in the theater after having finished reading the trilogy.  It was action packed and the actors fit into their character roles so well.  There were minor changes made in translation from the book to the movie, but nothing that I felt hurt the story.  If anything, I loved seeing Roth's world come to life as well as her characters.  After being disappointed in several movie adaptions of books recently, this was quite refreshing.  I would have liked the movie even having not read the book, I am sure.  It's my kind of movie. 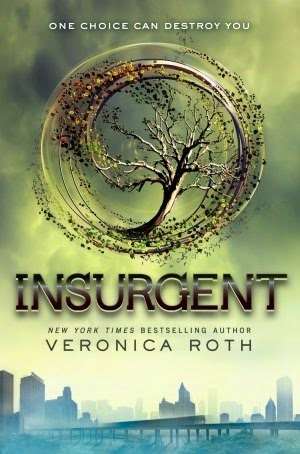 I wake with his name in my mouth. ~ First Sentence of Insurgent

Insurgent picks up at the very spot Divergent left off.  The world Tris knew has been torn apart.  Tris is feeling desperate and her grief is beyond measure.  Insurgent tackles the difficult subject of loss and guilt, and how heavily both can weigh on a person.

I enjoyed Insurgent, but not quite as much as the first book the series.  I still found the world Veronica Roth had created fascinating and was engrossed in the story and the characters.  I still raced through the book like there was no tomorrow.  I found myself annoyed with Tris, however, even as I tried to keep in mind all she was going through.  Her and her love interest's back and forth got to me though and there were a few times I wanted to shake them both and tell them to get over themselves.  I could blame it on the fact that they are teenagers, but adults act like that in literature all too often.  Probably in real life too.

What I liked most about Insurgent was the continued in depth look at society and human nature.  It is a dark take on human nature, mind you, but all too realistic under the circumstances as people lust for power and control over their own lives.  I also appreciated the way the author dealt with Tris's grief and guilt, and her continued struggle to define herself through it all.

I pace in our cell in Erudite headquarters, her words echoing in my mind:  My name will be Edith Prior, and there is much I am happy to forget. ~ ~ First Sentence of Allegiant

This is the book where the secrets of the world created by Veronica Roth are revealed.  While not all surprising given the direction the trilogy had taken at the end of the first book, it was still an eye opener.  I swear I felt just as lost and insignificant as the continuing characters must have felt once they entered the compound.  I cannot help but wonder too if that is another reference to how teenagers feel entering the "real world" after leaving school and entering adulthood.

In Allegiant, the characters continue to grapple with issues of guilt and grief.  Their view of the world has been completely altered and now new issues are coming to light, not all of which are good.

It is impossible to talk about this book without giving something/anything away, especially because I had several problems with it as I read.  I liked Allegiant okay, but I did not love it the way I did the first two books.  I ran into logic problems with Allegiant and there were choices made, particularly toward the end, that did not make much sense to me.  I had a harder time buying into this book than I did the others.  Maybe it was too ambitious.  It felt that way.

Even so, there were aspects I liked about the novel, so it wasn't a total loss.  Overall, I would recommend this series to those who enjoy the genre.

You can learn more about Veronica Roth and her books on the author's website.

Source: I purchased the e-copies versions of these books for my own reading pleasure.  I also paid for my own movie ticket, in case anyone is wondering.