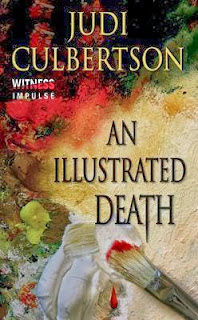 It's not every day you get an inside peek at the world of a famous artist.

So when bookseller Delhi Laine gets the opportunity to appraise the late Nate Erikson's library, she jumps at the chance, despite the mysterious circumstances surrounding the illustrator's death. But as she spends more time with the eccentric Erikson clan at the family compound in the Hamptons, Delhi can't help but wonder what really happened to the lost patriarch.

When death visits the family once more and another Erikson is found murdered, dark secrets come to light. Left coping with a charmed family not quite as idyllic as she first believed, Delhi is determined to solve the murders once and for all. But digging up truths can get you dirty . . . and Delhi is about to discover just how far some will go to keep them buried.

I confess I am not a big fan of mysteries set among the rich and famous.  The eccentricities get old after awhile and I find I relate so little to the characters.  But the idea of reading a mystery featuring a bookseller appealed to me, so I took a chance on Judi Culbertson's An Illustrated Death.


I had not realized this was the second book in the series, otherwise I would have started with the first book. Not that the reader needs to.  As with many mystery series, this book stands well on its own.  It's just that with only one book before it, I could easily have slipped the first book in.


An Illustrated Death was an enjoyable read.  It has a cozy feel to it with an amateur sleuth and a small town setting.  The main character and I hit it off right away.  Delhi seems like the kind of woman I wouldn't mind sitting down to lunch with, and not just because we are both book lovers.  Although that helps.  Delhi seems down to earth and like an all around nice person.

The Erikson family isn't short on eccentricities and they really aren't all that likable.  I felt sorry for Bianca, who lost her daughter, but she had an edge about her that was hard to get past. Still, the author has created an interesting story around them, secrets that aren't easily guessed--and boy, are there a lot of them!

I did enjoy the periphery characters, who I imagine are regulars in the series, especially Marty and Susie, both of whom I hope to see more of in future books.  I'm also really curious about the more personal story introduced in this novel relating to Delhi and one of her children.  Having not read the first book in the series, I do not know if the subject came up there, but it's certainly a hanging thread left at the end of An Illustrated Death that will be interesting to follow as the series continues.  Be warned, this personal side story has the distinct smell of a cliff hanger, even though it's not directly related to the main mystery in An Illustrated Death.


An Illustrated Death is a fast read, one that would be great for a quiet fall or winter afternoon. There's humor and heart mixed in with a good dose of suspense.  I wouldn't mind reading more by this author.

You can learn more about Judi Culbertson and her books on the author's website.