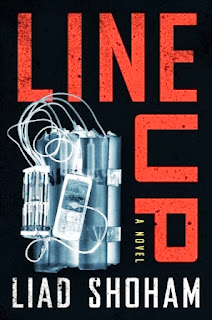 A brutal rape in a quiet Tel Aviv neighborhood has the police baffled. Detective Eli Nahum is eager to wrap up the high-profile case and sees an easy conviction when the victim's angry father delivers a likely suspect.

But Ziv Nevo isn't a rapist. He's a hired hand for a notorious mafia boss, and he's not going to tell the cops why he was really near the crime scene. When the case is thrown out on a procedural technicality, Nahum is suspended, Nevo goes free, and the mob smells a rat.

Then another rape occurs. Certain its Nevo, the cops are determined to see him to prison-unless the mob sends him to the grave first. On the run with his wife in the desert, an innocent man has one chance to survive-a disgraced former detective named Nahum who's determined to find the truth at any cost.

I enjoy reading novels set in countries other than my own, and so it was a no brainer to jump on this book tour when I was given the chance.  Lineup particularly intrigued me given the description, and it did not disappoint.

The novel is well written, and the author expertly weaves several different story threads together to form a cohesive and suspenseful novel.  There was nothing I did not like about this novel.

This book is all shades of gray. The novel presents several moral and ethical dilemmas, presenting various sides.  From the elderly woman who holds her tongue after witnessing the rape to the police cover up to the attempted clean up of that cover up and everything in between.  Add to that the not so innocent Nevo, accused of rape but guilty of another crime nonetheless.

Crime novels involving law enforcement can sometimes get bogged down in office politics, and while Lineup did have its share of that, the political threads were woven well into the story.  There's the issues of accountability, corruption, and the old versus the new.  The touches were subtle at times and more blatant at others but always fit the story well.

Lineup follows several different characters as the story unfolds.  There were many moments in which the reader can see how one event leads to another, how actions have consequences, even to those indirectly involved.  I love stories like this.  As I read, I could be heard groaning out loud--not out of annoyance at the book--but rather at the characters, knowing their choices had just set up another character for a fall or worse.

There really are no likeable characters in Lineup.  At least not from my perspective.  I wanted to like Detective Eli Nahum, but his hardheadness got in the way.  I had to admire his tenacity though, and his desire to correct his mistakes and own up to them.  I felt sorry for Nevo, but more so for his ex-wife and son. Nevo has made bad choices in his life and it was hard to see past that.  Amit, the reporter, well, I never grew to like him.  I think the character I did like was Nevo's defense attorney, but his part in the novel was a small one.

What I liked most about this novel was Liad Shoham's expert storytelling, his ability to keep the suspense going throughout the novel, and how well he captured the souls of his characters.  I will definitely be seeking this author's work out in the future.

To learn more about Liad Shoham and his books, please visit the author's Facebook page.

I hope you will check out what others had to say about Lineup on the TLC Book Tours route!