Stepping outside my comfort zone and into the literary world of romance seems to be this year's mission. This summer I decided on a little Highlander action.  I began with an author who I was familiar with and liked her writing style, moving on to one recommended by a fellow blogger.  Admittedly, I haven't much to say about any of them--I read them during a dark spot in my life and they provided the comfort I needed at the time.  I should also state up front that Highlander history is not one I am well versed in nor do I have a particular interest in it.  That did not stop me from enjoying the books, however. 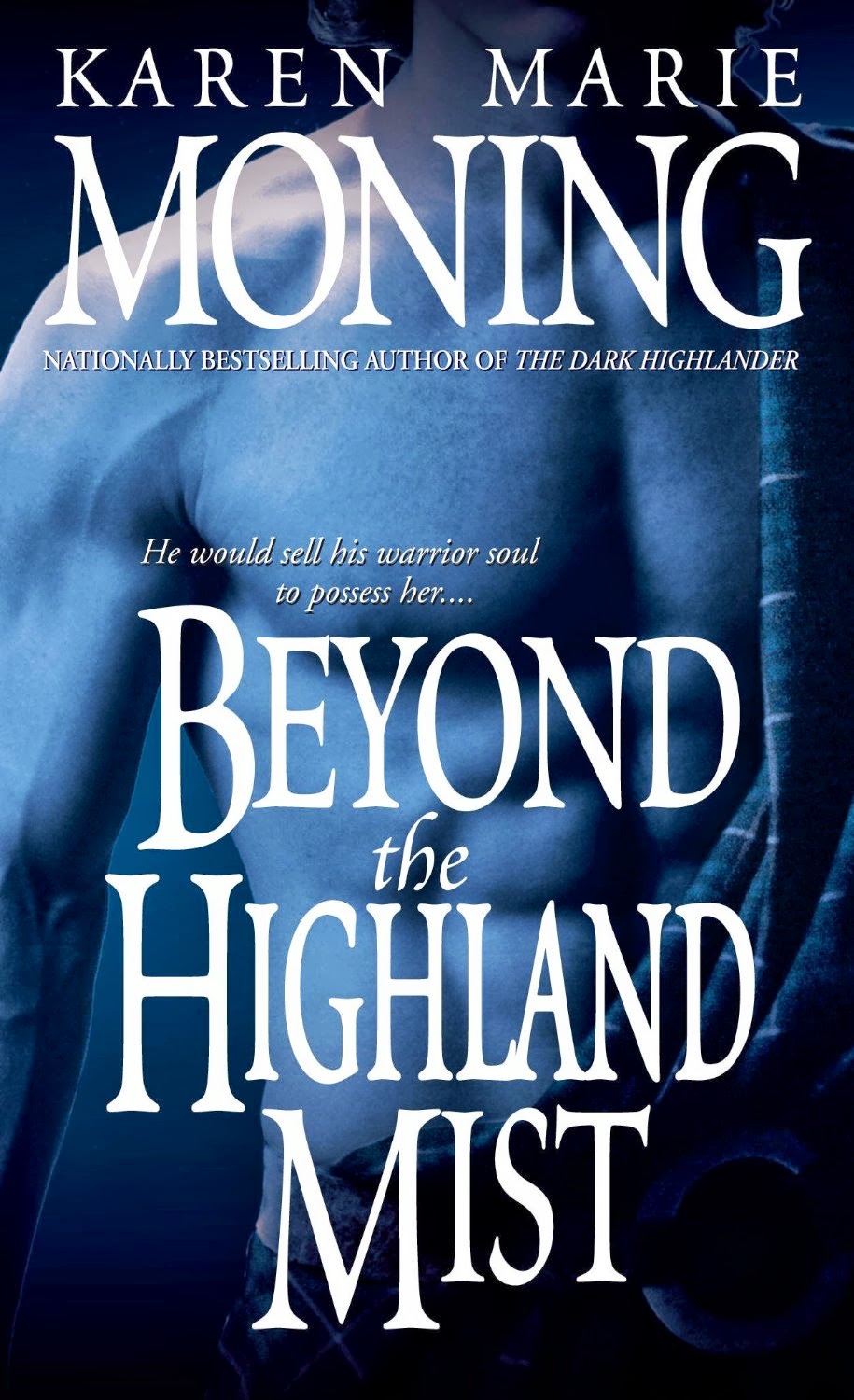 Beyond the Highland Mist by Karen Marie Moning (Dell, 1999; 416 pgs) ~ This is a series I plan to continue.  I fell in love with Moning's writing when I read Darkfever last year.  And so I felt safe venturing into her more romantic Highlander series.  After serving his king for so many years, Hawk finally has a chance for freedom, only to find he's to be wed to a woman he is loathe to marry.  Only, all is not as it seems.  The woman he takes as his wife is not who everyone thinks she is.  She is Adrienne de Simone of Seattle, Washington--transported from the future to the past as revenge by the fae.  The two couldn't be more ill-suited for each other--or rather, the perfect match.  I enjoyed the interplay between Hawk and Adrienne, the push and the pull, and the way the story unfolded.  I was drawn into the novel immediately and loved every minute of it, from the magic to the intrigue to the romance.

You can learn more about Karen Marie Moning and her books on the author's website.

Source: I bought an e-copy of this book for my own reading pleasure.

Monica McCarty's MacLeod Trilogy ~ After reading Moning's Highlander book, I thought I would give Monica McCarty a try.  Her historical romances came at the recommendation of fellow blogger, Trisha from Tripping Over My Tongue. Highlander Untamed is much more straight historical fiction than Moning's book, and I appreciated that the author ends her books with a note about the historical accuracy of each story and the liberties she takes to create a more entertaining story. 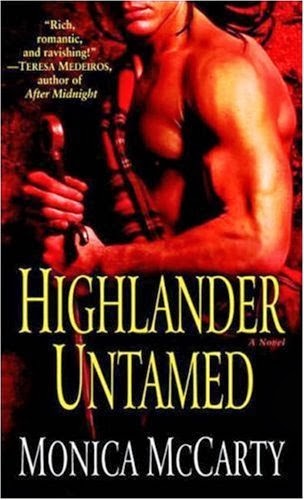 In the case of Highlander Untamed by Monica McCarty (Ballantine, 2007; 416 pgs), Rory MacLeod is the Laird of his clan.  As a way to stay in the king's good graces, he agrees to handfast a woman from a rival clan.  Isabel MacDonald has her own agenda when coming to stay with the MacLeod's for the year long handfast to Rory.  Sent as a spy, she is determined to prove her worth to her family.  Rory and Isabel are both determined not to fall for each other despite their apparent attraction to one another. 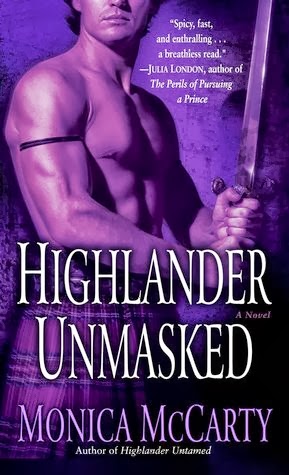 Highlander Unmasked by Monica McCarty (Ballantine, 2007; 432 pgs) ~ Alex MacLeod is the brother to Rory MacLeod from the first book in the trilogy.  He has a big presence in the first book, but it isn't until this book that the reader really gets a good look inside Alex's mind and a more complete understanding of what motivates him.  He is haunted by his past and out to prove himself.  As a result, he has been working undercover to gain information about an upcoming attack on the MacLeod's of Lewis.  The Seton and King want nothing more than to bring the Highlanders down a peg or two, breaking up their stronghold on the Highlands and going after Lewis is the way to do it.  While trying to gain information at court, Alex meets Meg Mackinnon, a woman he saved not to far from his home while in disguise as a mercenary.  Only, Meg knows her hero that day is him and she is determined to find out what Alex is up to and why he doesn't want anyone to know what he'd done. 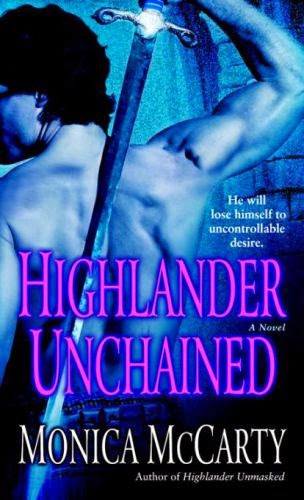 Highlander Unchained by Monica McCarty (Ballantine, 2007; 384 pgs) ~ Flora MacLeod does not want her mother's life.  She will not be forced into marriage by her half brothers or anyone else. It will be her choice, and her choice alone.  All that is threatened, however, when she is abducted by Lachlan Maclean.  Maclean must marry Flora--and have her agree to it of her own free will--only, he knows she will refuse him when she discovers the reason behind it.  He only wants to save his people and lands; he never meant to fall for the beautiful woman who has so much disdain for the Highland life he has to offer.  And she never anticipated falling for the very man who kidnapped her.

I enjoyed all three of the McCarty novels, although probably should not have read them in quick succession of each other.  The women were intelligent and self-sufficient and the men were attentive and thoughtful, even if all brawn and gorgeous.  The characters were complex, with chinks in their armor.  There were your expected moments of too much protest, but it rarely felt over done (except in Highlander Unchained).  The books shared a similar formula in terms of plot twists and climax, and, by the second book, I found myself taking more and more breaks in between chapters to read other things.

I liked how the author wove history into her stories--it was just the right blend for a romance novel.  Not too heavy and yet just enough to give the reader a good feel for the life and politics of the times.  I also really liked that there was intrigue mixed in with the romance.  It's what kept me interested to be sure.

I most liked Rory from Highlander Untamed as a hero.  His character had a good mix of intelligence, strength and vulnerability.  Even as I write this though, I can't help but think of Alex from Highlander Unmasked.  He was the more charming of the three heroes and the most complex. While Rory may have won me over as my favorite male protagonist in the series, interestingly, it wasn't his female counterpart that I most identified with and enjoyed getting to know.  Meg Mackinnon from Highlander Unmasked most won me over in the female protagonist department. She was ever practical and most often thought with her mind rather than her heart.  And although I liked Flora from the third book most of the time, I found myself getting annoyed with her and with Lachlan who I just wished would hurry up and be honest. By the time I got to the second half of the book, I was ready to strangle them both.  So much could have been resolved sooner if only he'd been upfront with her sooner. Still, I enjoyed the book and found the ending satisfying.

I am very much ready for a break from the Highlanders for awhile. I do want to continue with Karen Marie Moning's series, but think maybe I have had my fill of the genre for the moment. And while I enjoyed reading Monica McCarty's books, I have not yet decided whether I will read more of her Highlander books.

You can learn more about Monica McCarty and her books on the author's website.

Source: I bought e-copies of each book in this trilogy for my own reading pleasure.