Bookish Thoughts: A Conspiracy of Alchemists by Liesel Schwarz 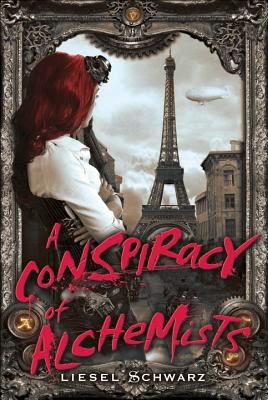 A Conspiracy of Alchemists: Book One in The Chronicles of Light and Shadow by Liesel Schwarz
Del Ray, 2013
Fantasy; 353 pgs

I wasn't sure what I was in for when I began reading A Conspiracy of Alchemists.  I avoided reading any of the reviews about it, but the description made it sound promising.  Plus, I really like the cover.  I read this book when I most needed something light and easy, and it proved to be a good fit.

I haven't read too much in the way of steampunk, and loved the descriptions of the devices and forms of transportation described .  It was interesting and the author did a good job of setting the stage for her novel.  I loved the idea of Elle, a female pilot trying to make her way among a mostly male dominated field.  Elle had been raised by her father, having lost her mother when she was young.  Her mother's death and reputation was mired in rumors of the occult.

Elle isn't one to believe much in magic.  She's very practical minded.  And although she sometimes finds herself walking between the Light (more scientific realm) and the Shadow (more magical realm), she'd like to think her feet are firmly planted in the Light.  When she takes on a job for one of her regular customers, the Frenchman Patrice, she soon finds herself questioning the reality she knows, both in the present and in the past.  What should have been a simple cargo flight from Paris to London, turns into a fight for her life as she flees an unknown enemy.  When her father is kidnapped, Elle will do anything to find him.  Even if that means putting her trust in Mr. Marsh, a shady character with high connections.

What unfolds is a story of magic and mayhem where alchemists seek their freedom from the vampires, and the warlocks try to hold onto that last sliver of magic they can find.  Author Liesel Schwarz brought the landscape her novel is set in to life from the descriptions of England and France and Italy and Constantinople.  The action is almost nonstop from beginning to end and plenty of secrets to be uncovered.  There is also romance, albeit a bit cliche.

When behind the wheel of an aircraft, Elle was quite the formidable foe.  I loved the scene where she was up against the air pirates.  She could be quite stubborn in an annoying sort of way, especially when it came to Mr. Marsh. I liked her overall, however.  She had heart.

I enjoyed getting to know Elle and the world she lives in, as well as many of the other characters, including  meeting Baroness Beladodia on the Orient Express, the absinthe fairy that stowed away in Elle's bracelet, and Inut, the half-faun who was eager to be of help.

I really like the idea of a steampunk novel about a female pilot, and admit to being a tad disappointed when it became clear the author was going in an entirely different direction with the character.  Even so, I let go of my expectation and let Schwarz take me where she would.  In the end, I enjoyed the ride quite a bit.  I definitely will be seeking out future books in the series.

You can learn more about Liesel Schwarz and her book on the author's website.

Source: I received a review copy from the publisher via NetGalley.