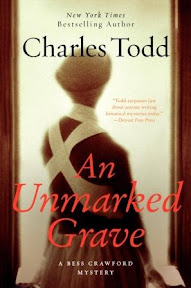 I stopped just outside the ward and leaned my head against the cool wood of the doorframe.  I couldn't remember when last I'd slept, or for that matter, eaten anything more than a few biscuits now and again with a hasty cup of tea. [opening paragraph]

Yes, it is true.  I am in love with another series.  Yet again I am kicking myself for waiting so long to read a book so many people I know have raved about. Better late than never, right?

For those who don't know, the Bess Crawford mystery series is set during World War I.  Bess is a nurse, working for the British military.  An Unmarked Grave is the fourth book in the series, but my first foray into Bess's world.  The Spanish flu epidemic is sweeping through Europe, cutting down civilians and soldiers alike.  It's made the jobs of the doctors and nurses on the war front even more difficult.  They are overextended and exhausted, praying they don't fall ill too.

When an unaccounted for body is found among the deceased flu victims on the front in France, Bess is asked for her opinion.  She knows right away it wasn't the flu that killed the officer, one she recognizes almost immediately.  Instead, she believes he's been murdered. Before she has a chance to tell her superior about the body, she is struck down by the flu, her life hanging in the balance. When she awakens in a hotel back in England among her family and friends, she wonders if the body was just a dream.  Enlisting the help of family friend, Simon Brandon, Bess sets out to find the truth.  Did she see the body of the dead officer?  Was it murder?  And if so, who was behind it and why?

This is one of those books that puts me in the mood for a leisurely afternoon of reading--the sunlight streaming in the window, maybe a plate of crackers and cheese to nibble on with my ice water closeby.  It's not a fast paced book, but it is a page turner, one I enjoyed immensely.  Bess is someone I wouldn't mind having over for lunch now and again.  She is smart and independent, thoughtful and resourceful.  She has an easy way with people that probably works well for her in both her profession as a nurse and her side job as an amateur slueth.

With a father high up in the military, Bess is able to get away with an awful lot. It explains away how easily Bess can get in and out of places, but at times it seemed to be too convenient. I didn't let this bother me much, however, since I was enjoying the characters and story so much.

I admit to having a little literary crush on Simon Brandon.  So little is said about him in this particular novel, but what I did learn made me like him very much.  He sounds like such a gentleman--sure he's protective of Bess, but he also trusts her opinion and isn't quick to dismiss her the way many men in that era might.

I do wish I had time to start with the first book in the series.  As with most series books, there is always a backstory that is worth knowing going into later books.  Just the same, An Unmarked Grave stands alone on its own well.

I loved the historical touches the authors put into the novel.  It brought the time period home for me and made me feel like I was actually there.

I can tell the mother and son team writing as Charles Todd will become a fast favorite of mine if this book is anything to go by.  I look forward to reading more about Bess Crawford--and hopefully getting to know Simon Brandon a bit more.

To learn more about the Charles Todd and their books, please visit the authors' website.

Many thanks to the TLC Book Tours for the opportunity to be a part of this book tour. Copy of An Unmarked Grave provided by the publisher.