Move in Day - 10/01/2000
02/19/2012 ~ My husband and I still drive by our old house occasionally to see if it is still standing. So far it is. I wonder what I will feel the day I creep up in my car and discover it's gone.
Two of the corner houses have been demolished already; empty dirt lots are all that remain. A couple of other houses across the street are gone too now as is another house that was just a couple doors down from ours. Just a couple of weeks ago, we noticed the mailbox was gone along with the roof top air conditioner. There were several holes in the roof, looking as if a giant had decided to punch holes into it. The life of the house is limited. A friend asked me why we bother visiting our old house; isn't it depressing?

My husband and I lived in our apartment for two and a half years when we decided to look into buying a house. We really couldn't afford one, but I wanted a dog, and we saw it as a worthwhile investment. What drew us most to the house was a room with two entry points--the perfect office, we decided. It was right off the main hallway with a doorway leading in and another on the other side, leading to the hallway with the other two bedrooms. The house's patio had been converted into a sun room, opening up the living room and making it seem bright and airy. We also liked the kitchen, which was a nice size, with it's little nook for a table and chairs. I never liked the bathrooms--but it was a compromise I figured I could live with. The master bathroom was especially small with only a toilet, sink and shower. Only one person could fit in the room at a time--two if someone stood in the shower.

It was an older home, built in the 1950's, boxy in shape with a huge flower box that ran the length of the front of it. The house needed a lot of work, work my husband and I thought we could handle but would soon learn we couldn't. We did what we could, even bought how to books. The truth is that neither of us is very handy and with work and little money, there was just too much for us to take on. We figured we had time though.

I didn't mind the trains. The tracks were several houses away, but close enough that when a train went by we not only heard the horn, but the house shook a little too. We got used to it quickly and most of the time didn't notice. I remember the first time I slept at my parents' house after having lived in our own house for awhile. I had trouble sleeping because it was so quiet. Of course, that changed when the city installed new horns at the railroad crossings throughout the city. Too many people were walking across the tracks and getting hit. The new horns were extremely loud. It was impossible not to hear them. Fortunately, I was able to sleep through it most nights.

When we got word that the land our house was on was part of a safety and transportation project, we were anxious to know exactly what that meant. We were told our house would be bought by the city sometime between then and the next ten years. That kind of put a damper on any future plans we had for the house. Why put money into it when it was only going to be torn down anyway? We waited. Our house grew older.

We lived in that house for 10 1/2 years. My dog, my cats, and my baby girl know that as our first home. I look back on that house fondly, but I don't miss it. Not really. I will always have the memories, and it is those I treasure most.

It does make me sad, however, to think that we will not be able to drive my daughter by the house someday and point it out, telling her that was her first house. Pointing out a road and underpass and calling it her once first home just isn't the same.

Yet, we drive by every now and then, waiting for the day the house will no longer be standing. Knowing that when it's gone, we'll still be surprised.
02/29/2012 ~ As has become my habit of late, I write my posts days in advance, polish them when I can and eventually post them on my blog. My computer time is so sparse as it is. I take what I can get when I can. I began writing the above back in January, finishing it finally last week with the necessary updates and scheduling it to post this week.

I drove by the house this weekend after my book club meeting. Those old walls are no longer standing, their voices silenced forever. I felt a lump in my throat and a few tears sprung to my eyes. Memories floated through my mind: move in day with family and friends helping carry boxes; wrestling with my dog Riley on the sun room floor; cuddling on the couch with my cat Parker on my lap; spending Saturday evenings in the office with my husband, both of us at our computers or catching up on television shows in the living room while cuddled up on the couch together; watching Anya curl up on my husband's foot to sleep; lazing in bed on a Sunday morning, with the birds chirping outside our window; trying to stay out of the way as the animals chased each other and raced around the house; walking the halls with our crying baby, calming her to sleep; remembering all the holiday celebrations, the illnesses, the break ins, and the joys. That house once held our laughter as well as our tears. It had become a part of us. A part of our family. And now . . .

Am I sad? Perhaps in those first moments when I realized the house was gone. Not so much anymore. Our time in that house had come to an end. Goodbyes were long ago said. I have moved on. My family has moved on. We are happy in our new home, making new memories. 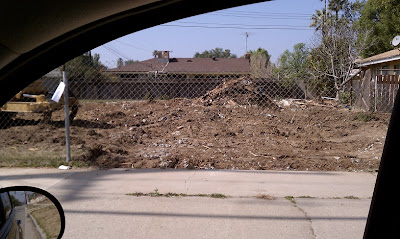