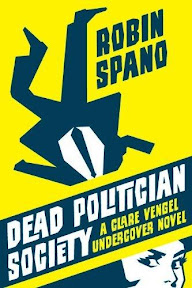 Clare Vengel tossed a leg over her Triumph and kicked it into gear. The sun was shining, the mayor was dead, and Cloutier wanted to meet with her. As she sped along Dundas Street, weaving a bit too quickly through traffic, visions of her first undercover assignment played in her head. [opening paragraph]

How far would someone go for the sake of politics? Clare Vengel is about to find out. Barely a police woman for 3 months, she is asked to go undercover as a student at the University of Toronto. The death of the mayor appears to be related to a secret student political society, and local authorities hope that Clare will be able to discover who is behind the murder. It is soon obvious that the mayor's death was part of a bigger plot as the bodies begin to pile up. It's up to Clare to find out whether the murders are being committed by an individual or the secret society itself.
Clare has a lot of her own issues; she's estranged from her family and unlucky in love. She is a bit of a rebel who knows her way around cars and rides a motorcycle. She longs to work undercover and hopes that she'll do well enough on her first undercover assignment to earn her a more permanent spot taking on such jobs. Clare is a little rough around the edges, but she has determination and brains.
This is the first in a new series by author Robin Spano. The author takes an interesting approach with the narrative, in particular for a series, by presenting points of view from various characters, including suspects, throughout the book. Clare is just one of the many storytellers. I thought it was a very effective way of having the mystery unfold. I wasn't too fond of any of the characters, except for Clare really, but, then, what do you expect when they all have a motive for murder?
Dead Politician Society was a quick read, one I enjoyed quite a bit. What made this mystery most enjoyable for me were the characters and their many sides, as well as the unfolding of the story. While I guessed the culprit behind the murders early on, it wasn't outright obvious. And what made the resolution all the more interesting was how it played out in the end. I am definitely going to keep my eye out for the next installment in this series.

(Good +)
You can learn more about Robin Spano, and her book on the author's website. You can also find her on Twitter and on Clare's Facebook page.
Source: I bought this book for my own reading pleasure.
© 2010, Wendy Runyon of Musings of a Bookish Kitty. All Rights Reserved.If you're reading this on a site other than Musings of a Bookish Kitty or Wendy's feed, be aware that this post has been stolen and is used without permission.
Posted by Literary Feline at 9/10/2010 12:00:00 AM