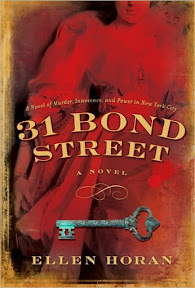 She tried to summon her best composure but her expression changed like a cloud movement: flashes of red emerged in sudden streaks across her face, and tears began coursing along her cheeks. her countenance betrayed such anxiety that Connery eyed her closely. His instinct told him to remain still--emotional moments like these were often followed by a confession. [pg. 15]


When Dr. Harvey Burdell, a New York dentist, is found brutally murdered in his own home, behind locked doors, suspicion immediately falls on those in the household, particularly Emma Cunningham whose sudden production of a secret marriage certificate between her and the doctor two weeks before the murder raises eyebrows and puts her innocence in doubt. Emma is a woman who is desperate to hang onto the last vestige of her social status, both for her daughters' sake as well as her own. She is near broke and facing eviction when she first meets Dr. Burdell. Dr. Burdell seems like a gentleman through and through. Only, he isn't nearly as perfect as he seems. As the investigation into his murder unfolds, it becomes clear that Dr. Burdell had many secrets and just as many enemies.

With the media, public opinion, and the ambitious district attorney, Abraham Oakley Hall, already poised to hang Emma, Henry Clinton steps in to defend her. He puts his own career on the line to do so.

Ellen Horan's novel, 31 Bond Street, is lush with detail. The mystery is tightly woven, at times intense, and always interesting. The story went in several unexpected directions. I had my theories, but nothing was quite as simple as it seemed. The narrative follows events as they unfold from the moment the body is discovered and is interspersed with flashbacks to the months before the murder, offering insight into the characters lives and motivations. New York was a character of its own: the bustling streets, the spreading out of a city, the back alleys and the upper class neighborhoods. I felt as if I was right there in the middle of the events as they transpired.

I hadn't realized when I first began reading 31 Bond Street that it was based on a true crime that took place in 1875 New York. In a way, I'm glad I didn't know as I might have been tempted to run and look up the story before finishing the novel. While that isn't always a bad thing, I've found, this is one book I preferred to go into blind. I look forward to reading more by Ellen Horan in the future.


You can learn more about Ellen Horan and her book on the author's website. Be sure and check the TLC Book Tours website as well for other tour dates and links to reviews.