Reviews: Dead in the Family & A Touch of Dead by Charlaine Harris 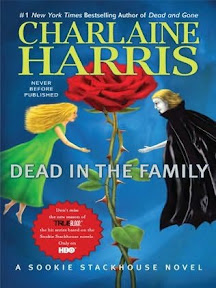 Reading a book in the Southern Vampire series is like soaking in a steamy bubble bath. Or, how I imagine it would be if I actually enjoyed baths. I'm more of a shower girl myself. But I digress. Dead in the Family is the latest novel featuring my favorite mind reader, Sookie Stackhouse, by Charlaine Harris, and it did not disappoint.

Picking up after the last book in the series, Sookie is healing from the injuries she received during the fae war. She doesn't have much time to rest, however, as trouble is brewing on all fronts. Vampire Eric's maker is in town with a not-so-little problem he is hoping Eric will help him resolve, Sookie has a new roommate, and someone whose intentions are less than savory is lurking in the woods. Add to that the recent tensions caused by the coming out of shape shifters and weres to the public. And that's just for starters. Dead in the Family is chock full of fun and suspense.

I always enjoy my time in Sookie's world, hanging out with old friends and seeing what trouble everyone's getting into. Over the course of the series, I've grown to really dislike Sookie's brother Jason, but I have to admit I actually liked him this time around. He seems to be growing up, finally. I'm still not completely convinced he will stay on the right track though. Hunter, Sookie's five year old nephew, makes an appearance. I hope I get to see more of him in future books.

As much as Sookie has been through over the course of the series, in particular the last several books, it would have been impossible for her to remain unscathed. Her view of the world has shifted and she is a bit harder; however, she still maintains her sense of fairness.

I am a big fan of the television show, as different in tone and style as it is from the books. While I usually can keep the two separate in my head, I found myself getting the two mixed up in a couple of spots this time around. I think that is more from my having read the early books in the series so long ago. One of these days I might get around to rereading the series.

After reading Dead in the Family, I was not quite ready to leave Bon Temps, Louisiana and so finally dived into A Touch of Dead, a compilation of short stories featuring Sookie written by Charlaine Harris over the years. Some of the stories I had read before as they appeared in various short story anthologies, while others were new to me. I have to say, I'm glad the author and publisher decided to put the stories all in one place--it makes things easier for those of us who follow the series. 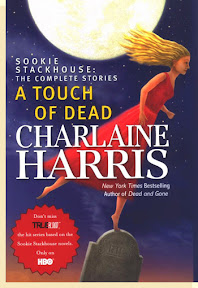 Some of the stories are better than others, but one thing that was clear was just how much Sookie has grown and how intricate the world Harris created has become. My favorite of the stories is "One Word Answer," which is actually among the ones I had read before. It only got better in the rereading. In this particular story, Sookie learns about the death of her cousin, who had been a consort of the vampire Queen of Louisiana. There are four other stories, one about Eric's birthday bash for Dracula, a Christmas surprise for Sookie, a request by a fairy friend to look into the murder of her sister, and an insurance caper. I enjoyed this collection of stories quite a bit.

Upon completion of Dead in the Family and A Touch of Dead, I am now officially done with the Sookie Stackhouse Reading Challenge. I thought I was done back in July when I wrote my closing summary, but the release of these two most recent books meant I could drag it out a little longer.

The Southern Vampire series is light and entertaining. It's pure fun and I have enjoyed reading each of the novels. I sure hope Charlaine Harris is busy writing the next book in the series! Until then, I'm anxiously awaiting June 13th, the start of the third season of True Blood. I'll get my fix anyway it comes.

You can learn more about Charlaine Harris and her books on her website.

Source: I bought both books with my own hard earned money.

Many thanks to Beth Fish for hosting the Sookie Stackhouse Reading Challenge!