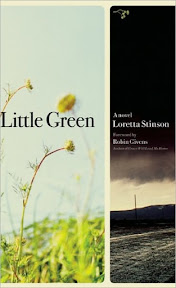 A phrase she remembered played in her head, and she let it spin as she began walking. Keep on truckin'. You got to keep on truckin'. She repeated this phrase until she reached The Habit miles away. [pg 38 & 39]


A woman once told me that every couple fights. She wasn't talking about a verbal argument. She meant the kind of fighting that involved hitting, pushing and hair pulling. Her mother had been a victim of domestic violence as was she. She did not know anything different. She loved her husband, and, while leaving him crossed her mind, she was too afraid of him and worried that she wouldn't be able to support her children without his help. Alcohol and drugs played a part in her husband's violent episodes and they helped numb her to get her through.

Domestic violence is a prevalent problem in our society. It affects men and women of all ages and social classes. Author Loretta Stinson brings home one such example in her book, Little Green. Janie Marek ran away from home when she was 14 years old. Her mother and father had died early in her life, leaving her in the care of her father's second wife. Janie took to the streets hoping for a better life. What she found was hardship and strife. At sixteen, Janie has learned the rules of living on the streets, and yet she still maintains a sense of hope that life will get better. She takes a job as a topless dancer and settles in a small Washington town for a short while, at least long enough to earn a little money. It is there she meets Paul Jesse, a drug dealer ten years her senior. They feel a connection that they both fight against, but, after tragedy strikes, the two give in.

At first life seems good. Janie and Paul get along well. She dreams of a future with him. Paul, on the other hand, is less sure. He's an independent spirit and likes his easy life. But he also cannot deny the love he feels for Janie. So, when she asks him if she can move in with him, he agrees.

As the story progresses, Paul's drug use spirals out of control and his violent rages increase. Janie is sure her love and influence will change him. She puts up with his behavior because she loves him . . . and later because she is afraid of him.

Author Loretta Stinson's writing is matter of fact. I instantly liked Janie and cared about her, but I never really got that sense of walking in her shoes that I look for when reading a novel. I was always just an observer--kept at a distance. I am having a hard time putting my finger on exactly why I felt that way. Was it me? Was it the book? I'm not sure. Despite that, the author did an amazing job of capturing the attitudes, thoughts and motivations of her characters as well as the realities of how drug abuse impacts not only the abuser, but those around him too. My heart broke for Janie, and even for Paul, as he descended further into his drug addiction. Even with all Janie went through, as broken as she was, her resilience is a testament to the human spirit as are the friends who stood by her through to the end.

Janie and Paul may be fictional characters, but their story is one shared by very real people. The novel is set in the late 1970's, however, it could very well be set today. Little Green is an important novel that is well worth reading.

You can learn more about Loretta Stinson and her books on her website.


Source: Book provided by the publisher for review.