Review: Wife of the Gods by Kwei Quartey (& a Giveaway) 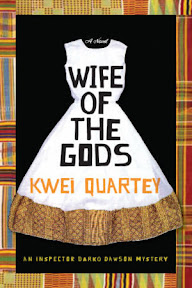 "So cold," he murmured. "Once she was warm and breathing."
It was what he could never quite get his mind around--not just how complex life was, but why it was so easy for life to leave a person once so complex. [excerpt from Wife of the Gods]


When I first saw mention of Kwei Quartey’s Wife of the Gods, I knew I had to read it. I can’t resist a crime fiction novel, especially one set in a country other than my own. I get to learn about another country and culture while at the same time settling in with the comfort of the familiar format of a mystery.

Kwei Quartey’s protagonist, Darko Dawson is the kind of detective I would want investigating my murder. He has a dogged determination and a strong sense of right and wrong—at least where others are concerned. Righteous is the word that comes to mind, but not in an arrogant or overbearing way. Darko is anything but perfect though. He has a weakness for marijuana and a bit of a temper which lands him in plenty of trouble.

The novel is set in the beautiful country of Ghana. Quartey paints a portrait of a complex society, one that straddles the old traditions and the new. In a community where witchcraft is feared and superstitions are commonplace, science is still trying to find a foothold. Detective Inspector Darko Dawson is a modern man. He trusts in science and facts to solve his cases. When he is assigned to Ketanu, a small out of the way community, to aid in the murder investigation of a volunteer AIDS worker, he comes face to face with the very superstitions he disdains.

The Chief Inspector of Ketanu has his eyes set on a particular young man as his suspect, but Darko isn’t convinced. He sets out on his own investigation, determined to solve the murder.

Darko’s mother disappeared after a visit to Ketanu over twenty years before while visiting her sister who lived in the town. Perhaps he can look into her disappearance while there as well. It’s a long shot after so many years, but he at least wants to give it a try.

I have seen this book compared to Alexander McCall Smith’s The No. 1 Ladies’ Detective Agency, and I have to disagree. Smith’s series is not much of a crime fiction series at all—and if you go into those books expecting a mystery, you may well be disappointed. With Quartey’s book, on the other hand, a mystery is exactly what you get. It’s also a bit darker in some respects, than Smith’s series.

There was so much I liked about this series, including the various interesting characters, the flashbacks into Darko’s past and the unfolding of the mystery of his mother’s disappearance as well as the murder of that young volunteer. There was a moment early on in the book when I thought one story thread might get lost in other, but fortunately that did not happen.

Another aspect that especially caught my attention was the health department and volunteers like the murdered woman who struggle to reach a population of people who are very entrenched in the old ways. The misinformation and superstitions surrounding AIDS is frightening. Add to that the issue of fetish priests and the practice of families marrying off their teenage daughters to them in hopes of turning around bad luck or getting rid of a curse. Quartey offers both sides of these issues to some extent, but it is clear which side Darko falls on.

Wife of the Gods is a promising start for a new series. There are many characters, including Armah, Darko’s inspiration and mentor, that I hope I can visit again. And I do hope I haven’t seen the last of Elizabeth Mensah. She’s an admirable and strong woman. Kwei Quartey is definitely an author to watch.

To learn more about the author, Kwei Quartey, and his book, visit his website. Visit TLC Book Tours for a list of Kwei Quartey's tour stops!