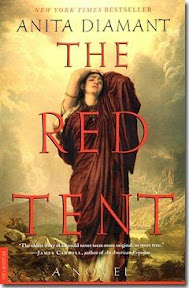 We have been lost to each other for so long.
My name means nothing to you. My memory is dust. [except from prologue]


Synopsis from the Publisher:

Her name is Dinah. In the Bible, her life is only hinted at in a brief and violent detour within the more familiar chapters of the Book of Genesis that are about her father, Jacob, and his dozen sons. Told in Dinah's voice, this novel reveals the traditions and turmoils of ancient womanhood—the world of the red tent. It begins with the story of her mothers—Leah, Rachel, Zilpah, and Bilhah—the four wives of Jacob. They love Dinah and give her gifts that sustain her through a hard-working youth, a calling to midwifery, and a new home in a foreign land. Dinah's story reaches out from a remarkable period of early history and creates an intimate connection with the past. Deeply affecting, The Red Tent combines rich storytelling with a valuable achievement in modern fiction: a new view of biblical women's society.

Occasionally I come across a book I know I will read again. Maybe not today or tomorrow, but someday. The Red Tent by Anita Diamant is one such book.

I admit I was really hung up on the whole "biblical" side of the story before beginning my reading, and that was a bit off putting. As much as I love to explore religions of all kinds and their histories, reading a book about biblical figures isn’t exactly my cup of tea. Even with the reassurances of friends and fellow bloggers that I had nothing to worry about, I still hesitated. I dragged my feet and even considered not reading it just yet. But I voted for the book in a group read and it would not look very good if I did not at least give it a try. And, of course, just like everyone said, I had nothing to worry about.

I loved the prologue. It is one of those that grabbed my attention from the very first moment. I was sure I would love the book. As I continued on, however, I became disillusioned. The story itself was interesting, including the history of Dinah’s family, in particular that of her mothers and how they came to be with her father, Jacob. It was written in the style of a story being told to the next generation—the exact atmosphere the author was most likely hoping to achieve. And yet, I found my attention wandering. I wanted to be a part of the story, rather than just having it told to me (I blame that more on my mood than on the book itself). Not to mention I wanted to get to know Dinah. Her family history was interesting and all, but I wanted to know more about Dinah.

I can pinpoint the exact moment when the book completely won be over—when I knew I might end up loving it after all. It was about page 161 when Dinah was left behind by her family to serve her grandmother, Rebecca, in Mamre.

Despite my reservations about the biblical aspects of the novel, I couldn't help but think of the Bible stories I was raised on as I read; and I wish I'd remembered them a little more clearly. Throughout the early part of the novel, I repeatedly flipped back to the family tree at the beginning of the book, making sure I remembered who belonged to who and how they were all connected.

What drew me most to the story was the strength of the women and the joy and care they took in their traditions and beliefs. Even though they lived in a patriarchal society, their rituals and traditions were empowering. It was a time when a girl becoming a woman was celebrated; whereas the day would eventually come when it was something to hide and be seen as a curse. There was one moment in the novel in which Jacob learns of the women’s rituals surrounding a girl’s first menses. He becomes angry and violent. I couldn’t help but feel very sad at that point. It was a foreshadowing of what would come—not in the book so much, but in reality—such traditions eventually died out in many cultures and were no longer reveled in. Just as how the stories, once passed down from mother to daughter, seemingly became the realm of men. Or at least, their stories became the ones heard and repeated most often.

Dinah had a relatively happy childhood, but her adulthood was a difficult one, no thanks to two of her brothers. I most enjoyed the time we spent in Egypt together, although it was not always the happiest of times. It was during the second half of the book that I really felt I got to know Dinah, and became a part of her world. I cried with her and took joy in the happy moments. She truly is an admirable character and I am glad I got the chance to know her in The Red Tent.

The Red Tent reminded me a bit of one of my favorite novels: Marion Zimmer Bradley’s The Mists of Avalon. The two are very different books, of course, but they both feature strong female characters and touch on similar issues that women faced in our history as well as on a spiritual level.

By the time I finished the last chapter of the book, I felt satisfied. There is so much more I could say about this book. It is full of nuances I have not even begun to touch here. Even with those moments when I doubted the book would live up to my expectations, I can truly say this is a book well worth reading.

To learn more about the author, Anita Diamant, and her books, visit her website.