Review: Dead and Gone by Charlaine Harris (& Challenge Wrap Up) 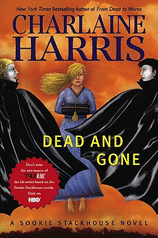 
There are times when I wish I could read people's minds. I imagine it would get tiresome after awhile--not to mention the headache! And would I be able to block out the voices and images that flood my mind? I am sure there are some thoughts I would rather not be privy to. No, I don't envy Sookie Stackhouse at all.

Dead and Gone is the 9th book in Charlaine Harris' Southern Vampire mystery series, featuring Sookie Stackhouse, a Southerner in Bon Temps with the ability to read minds. It's a series filled with supernatural beings, a bit of magic, romance and mystery. Sookie and I have been through a lot together over the years. We have shared laughs, tears, and many frightening experiences. I was with her when she met her first vampire and discovered that the world around her was not the world she'd grown up believing it to be.

In this latest installment of the series, the were-people and shape shifters have decided it is time to announce their existence to the world. The vampires have been more of less integrated into society for quite a while, and the two-natured folk feel the time has come to step outside of the proverbial closet. Their coming out is met with a mixture of fascination, excitement, fear and anger. When the body of a woman, partially shifted into her animal form, is found hanging from a cross in the back of Merlotte's, the bar and grill where Sookie works, it's a sure sign of a hate crime. The real question though is whether the murder took place as a warning to other shape shifters or was it more personal?

As if that wasn't enough, a civil war is brewing between the fairies, and Sookie is right in thick of it. Add to that the inquisitive FBI agents who are breathing down her neck and a rather disturbing turn in her relationship with one of her vampire friends.

Trouble always seems to find Sookie and it does not waste time finding her again in Dead and Gone. She is joined by some of her usual crowd: her brother Jason, whose neck I wasn't quick to want to ring this time around; the ever sexy and confident vampire Eric; Sam, Sookie's charming boss; Amelia, Sookie's witch roommate; ex-boyfriend and vampire Bill Compton; and, of course, a special appearance by none other than Bubba himself. And that's just for starters.

I enjoyed Dead and Gone overall. I gobbled it up quite quickly as I often do Harris' books. That said, it left a little something to be desired. I liked the story well enough, but a couple of major scenes fell a little flat for me, especially towards the end. There were also side story lines that I would like to have seen more fully developed. All in all though, it was still a fun novel and a good escape from an otherwise stressful day.

It's been interesting to watch Sookie grow as a character. She isn't quite as innocent as she once was. The series has definitely taken a darker turn with each book. While Dead and Gone is not my favorite book of the series, it will tide me over until I can get my next Sookie fix.


Challenge Commitment Fulfilled: 2009 Pub Challenge, Buy One Book and Read It Challenge, & Sookie Stackhouse Challenge
Well, what do you know? I have completed my first challenge! Technically, I suppose, it's the second one I have completed, but since I have have yet to prepare a wrap up post for that particular one, it's fair to say this one will end up being tallied as number one. It also happens to be the most recent challenge I joined. What challenge is that, you ask? Why the Sookie Stackhouse Challenge!

When I signed up, I mentioned that it felt like cheating, considering I only had the one book to go. I am now officially caught up with the Southern Vampire mysteries.

The True Blood television show that is based on the series is one of my favorite shows on the air today. Whereas the books are light and somewhat humorous, the television show is edgy and dark (not to mention graphic in terms of violence and sexual content). While the two are very different, they both are deliciously good.

Dead and Gone is the first novel in the series I have read since the start of the television series. It did make the reading experience different for me. The characters in the book blended a bit with the characters in the show. For some, it was important to keep them distinct, however, since their story lines vary so much from page to screen. I have to wonder if my warming to Bill a little in Dead and Gone has something to do with his television persona. I've never been a fan of his in the books before now.

I think my favorite books in the series fall somewhere in the middle. Dead to the World, book four, is at the top of that list. I have not been quite as impressed with the later books in the series, including Dead and Gone, however, I still find the novels entertaining. They're pure brain candy, and who does not need that once in awhile? I will continue to follow Sookie wherever she may go. I enjoy the world Charlaine Harris has created and look forward to seeing what new directions she will take Sookie and I next.

The Books:
Dead Until Dark
Living Dead in Dallas
Club Dead
Dead to the World
Dead as a Doornail
Definitely Dead
All Together Dead
From Dead to Worse
Dead and Gone

Many thanks to Beth Fish for hosting this fun challenge!