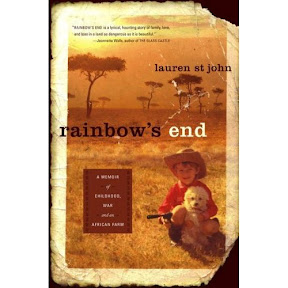 Rainbow’s End: A Memoir of Childhood, War, and an African Farm by Lauren St John
Scribner, 2007 (ARE)
Nonfiction; 269 pgs.

First Sentence: They weren’t supposed to be there.

Reason for Reading: This book fit in perfectly with my planned African-themed month (which has gotten off to a late start and will be occasionally interrupted by an off topic book or two), and so it’s arrival came at a good time.

Warning: I fretted over whether to include a vague mention of the current state of Zimbabwe and Mugabe's leadership in my thoughts below. Is it too much of a spoiler? For some it may well be, however, it is not truly a spoiler for Lauren's own story, although it holds a sort of irony in its own way. Rainbow's End is about Lauren and her family, their struggles during a tumultuous time in Africa. The politics and leadership of Zimbabwe are well known, written in history and very much a part of current events in the world today.

Comments: Lauren St John was born and raised in the African country of Rhodesia, in the country that would eventually become Zimbabwe. She was the forth generation living in Africa and yet she will never be considered as African because of the color of her skin.

A child born into a culture and a society adopts the beliefs and values of that culture without much thought. The child is taught to believe and think in much the same way as his or her parents and the society he or she is exposed to. Lauren St John was no different. She is a fourth generation Rhodesian and Africa is very much her home. Rhodesia was in the middle of a Civil War during most of Lauren’s childhood. It was a way of life for Lauren, and she coped by turning the experience into an adventure of sorts. At one point in the book the author likened the war to being like "the Old West, where lone ranchers defended themselves against shadowy but well-armed assassins who came in deadly bands of three or six or ten." She further explained that it was nothing like the war in Vietnam or with tanks and explosions everywhere. Still, she did not see or experience the worst of the war, although there was still great risk and fear among the farmers in the area where Lauren grew up. The Rhodesians took precautions as necessary, but still held onto hope and a sense of safety, whether it was real or not. There was a sense of community and everyone looked out for one another.

After several moves and new beginnings, Lauren’s family settled on a farm at Rainbow's End, a beautiful place that bordered on a river. From Lauren’s descriptions, it was an enchanting place that attracted all sort of wildlife and was full of happy memories. Yet there was a shadow that hung over Rainbow's End. Several months before Lauren and her family moved into the farmhouse, four members of the Forrester family were murdered in that house by terrorists in the night. One of the victims was an 11-year-old boy whom Lauren sat next to in school. It was his room she would later occupy. The constant fear that terrorists would return and kill her family lived with Lauren throughout the rest of the war.

Despite the grimness of the war, Lauren led a relatively happy childhood, taking in animals of all kinds. Lauren was very much a tomboy and preferred to live her life on the edge, taking risks and trying to keep up with the boys. She enjoyed the same dreams that many young people have, dreaming of fame and recognition. Like her father, Lauren was in love with Africa and felt pride in her country. Although she did not fully understand everything about the war effort, she knew that her side was fighting for democracy and opposed to communism. Her side was the good side. Or so she thought.

It was not until the end of the war that much of what Lauren believed about the war, the cause and the motives, suddenly came crashing down. Her reality was shaken to its core. And as all she knew and thought about her country was brought into question, her family also began to disintegrate.

There is no pot of gold to be found at the end of Rainbow's End. As the war came to an end, people around the globe cheered and the majority in Zimbabwe celebrated an end to oppression. No one could foresee the direction elected officials would take the country in the years to come. The once lauded leader, President Mugabe, would eventually begin his own reign of terror, one that to this day includes allegations of fraud, violent repression, and murder. I came away feeling a great sadness for the people of Zimbabwe and all they have had to suffer at the hands of bad leadership, be it the white oppressors or the black.

Lauren's words painted an amazingly beautiful picture of a land and its people while at the same time, capturing the tragedy of war, regardless of the side a person is on. The book is above all Lauren St John’s story and that of her family during a tumultuous time in Zimbabwe’s history. It is a story that captures the essence of a girl who survived the best way she could, finding normalcy and courage in a difficult environment, always adapting as needed to the events in her life. The Rainbow’s End will make a perfect discussion book for book clubs and is one that inspires further research into the history of Zimbabwe, including the struggle of the freedom fighters and the political leaders, both past and present.

Favorite Part: One of my favorite scenes was Lauren’s first ride on Charm. It was comical in its own way, but I especially liked how Lauren adapted her dream to fit the horse and didn’t linger in her disappointment that Charm wasn’t her black stallion.

I also loved the scene where Lauren is reading while leaning against the tree, and Jenny the giraffe peers around the tree at her.

The most moving part of the book is when Lauren pours out her thoughts about her newfound knowledge of what the war was really about and everything she believed begins to come into question. Instead of pleading ignorance, Lauren takes ownership of her own blindness and prejudices, even those that might be forgiven a child who was raised to believe no different. As Lauren saw it, she should have known.

Miscellaneous: I love the cover of this book. Had I seen it in the store, I would have most likely picked it up to read the blurb inside the cover to see what it was about (and then bought it).
Posted by Literary Feline at 6/12/2007 09:20:00 PM