The Fire Rose by Mercedes Lackey 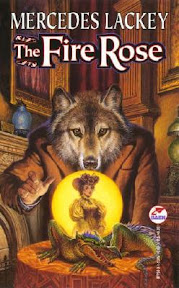 First Sentence: Golden as sunlight, white-hot, the Salamander danced and twisted sinuously above the plate sculpted of Mexican obsidian, ebony glass born in the heart of the volcano and shaped into a form created exactly to receive the magic of a creature who bathed in the fires of the volcano with delight.

Reason for Reading: This is my final selection for the Once Upon a Time Challenge. I added this title to my TBR collection in October of 2004, along with a few others of this author’s books. I am a big fan of her Valdemar series and was curious to discover what other treasures she had written.

Comments: I had almost forgotten how entertaining a novel by Mercedes Lackey could be. In The Fire Rose, the author takes a favorite fairytale of mine, “Beauty and the Beast,” and adds her own flavor and spices to it.

Rosalind Hawkins, a medieval scholar, has just lost her father and learned that he was in great debt. She’s soon to be out on the streets with hardly anything to call her own. When the offer to become a governess to the two children of a wealthy railroad baron comes, it seems too good to be true. However, after careful consideration she decides to leave the city of Chicago where she grew up for the western city of San Francisco. Upon her arrival, she quickly learns that she has been deceived. There are no children to tutor, no wife to the baron and only one servant in the mansion where she now resides. She is asked to read manuscripts and texts to her employer, Jason Cameron, through a speaking tube, whose hope is that she will lead him to uncover the key that can unlock him from his prison. Rose is not the kind of woman to be kept in the dark for long. She soon puts two and two together and discovers her employer’s deep dark secret just as Jason’s enemies turn their attention to Rose.

San Francisco in the early 1900’s is the perfect backdrop for the novel. Women have their place in society but are making definite movement towards beginning their struggle for equality. Rose is a woman who has never been content in the traditional role, wanting to get a doctorate and stand on her own two feet. She wears glasses, thinks herself rather plain and is a bookworm. The perfect heroine.

Amidst the magic and glamour of wealth, there is a darker side to the novel. Mercedes Lackey takes readers into the cribs and opium dens of San Francisco’s Chinatown, the whorehouses, and slave trade of women.

The Fire Rose is a worthwhile read in more ways than one. Its touch upon history and the more fantastical elements make it an engaging novel that is difficult to put down. It is always risky to take a favorite traditional story and make it your own, however, Mercedes Lackey succeeded marvelously.

Favorite Part: It always warms my heart to read a book in which at least one of the main characters is a booklover, and so I found a kindred spirit in Rose Hawkins right from the start. I like strong female characters and Rose certainly was that—as well as intelligent. My favorite character, however, is probably Jason Cameron’s personal Salamander. Although he wasn’t much of a character in presence, his loyalty, intelligence and manner drew me to him. Of the humans, Master Pao was one of my favorites and I wish I we could have gotten more into his history. Alas, this wasn’t his story.

What better place to learn more about the author and her books than her website? Do stop by!

Miscellaneous: This week we celebrated Anjin's birthday, but because it landed on workday, we decided to extend it through the weekend. After a brief excursion to the mall, we had a birthday lunch at the Cheesecake Factory. This was only my second time ever going there. Let me just say the White Chocolate Peanut Butter Truffle cheesecake is to die for. Very yummy.
Posted by Literary Feline at 6/09/2007 07:58:00 PM