Some men are born mediocre, some men achieve mediocrity, and some men have mediocrity thrust upon them. - from Catch-22 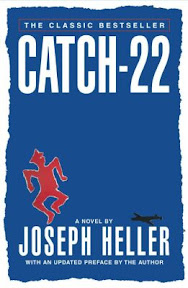 "Every writer I know has trouble writing." - Joseph Heller

First Sentence: It was love at first sight.

Reason for Reading: This is my third selection for the Winter Classics Challenge.

Synopsis From the Publisher: At the heart of Catch-22 resides the incomparable, malingering bombardier, Yossarian, a hero endlessly inventive in his schemes to save his skin from the horrible chances of war. His efforts are perfectly understandable because as he furiously scrambles, thousands of people he hasn't even met are trying to kill him. His problem is Colonel Cathcart, who keeps raising the number of missions the men must fly to complete their service. Yet if Yossarian makes any attempts to excuse himself from the perilous missions that he is committed to flying, he is trapped by the Great Loyalty Oath Crusade, the hilariously sinister bureaucratic rule from which the book takes its title: a man is considered insane if he willingly continues to fly dangerous combat missions, but if he makes the necessary formal request to be relieved of such missions, the very act of making the request proves that he is sane and therefore ineligible to be relieved.

Comments: Where to begin? Or better yet, what can I say to best sum up my thoughts about this quirky, hilarious, and yet disturbing novel? Heller presents a colorful cast of characters that at once touch the heart and yet at the same time make a person shake his or her head in dismay.

I never had the opportunity to read Catch-22 when I was in school, but for some reason decided it was a classic I needed to read at some point. The Winter Classics Challenge was the perfect excuse to give it a try. I admit that my enthusiasm for the book, despite my husband’s insistence that I would love it, waned when several fellow booklovers expressed their dislike over the book. And so, it was with a bit of reluctance that I stepped into the past, joining the U.S. Army Air Force in Mediterranean during World War II. The more I read, the more it became clear just how well my husband knows me—and my sense of humor.

It was impossible not to laugh at the circular arguments some of the characters got into, the dilemmas they created for themselves, and the off the wall antics of some of the eccentric characters. The names of T.S. Eliot and Washington Irving will have a place in my memory for a long time, no doubt. While the story and characters themselves were not exactly what I would call realistic, they did fit the story well.

The novel was not all laughs, however. There were many darker moments as well, especially the deeper into the novel I read: reminders of the hardships of war, the fear that grips a soldier’s heart with each new mission, the longing to go home, and the unavoidable causalities that will inevitably hit close to home. My heart ached for the injustice faced by several of the characters as well as the confusion and the fear that wouldn’t leave them.

There are many interpretations out there of the message behind Heller’s novel, whether it be about the military and the political establishment, bureaucratic operation and reasoning, patriotism and honor, or the spiritual debate. Regardless of what a reader takes away from the novel, it is a book that has stood the test of time because people can relate to it at varying levels. Absurd much of the time with over the top characters, Heller ‘s Catch-22 is satire at its finest.

Favorite Part: While my husband’s favorite character in the novel is Major Major, mine would probably be Orr. Orr was Yossarian’s roommate for much of the novel. Orr is a bomber and was very good with mechanical things. He liked to walk around with crab apples or horse chestnuts in his cheeks.

Least Favorite Part: The timeline in the novel flucuated and was a bit confusing at times. One minute I would be in the “present” and the next I would be in the past with no warning. It took a second or two for my brain to catch up when that happened.

Note about the Author: Joseph Heller’s novel is the basis for the commonly used phrase, catch-22. The novel originally was titled Catch-18, however it’s been said that the title was changed when Leon Uris’s novel Mila 18 was published, sharing a military theme but little else.

Miscellaneous: I had to play nurse to my overly curious dog last night. He came away from his unexpected encounter with who knows what with scratches, a possible bite and a strained front leg. His vet recommended rest for the next 10 days along with his prescribed medication. My dog, rest? Haha! This will be a challenge . . .
Posted by Literary Feline at 1/30/2007 07:41:00 PM