Vivian nudged her daughter as they walked out of the customs area at Heathrow Airport. ~ Opening of Royal Holiday 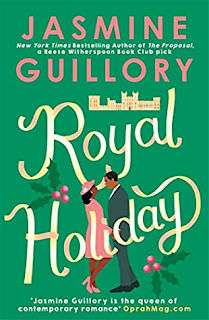 Vivian Forest's daughter Maddie will not take no for an answer when she asks her mother to spend Christmas with her in England while she is on assignment to design and dress a Duchess. Facing a possible promotion that will tie her up time-wise, Vivian plans to take full advantage of her stay in England. What she doesn't expect is to meet the charming Malcolm Hudson, the Queen's Private Secretary. The two hit it off right away and the more time they spend together, they closer they become. However, they both know their any relationship they have will be short lived. They both have their own lives to live--and an ocean between them.

Royal Holiday is a sweet holiday romance between two middle-aged people (yay!). Malcolm and Vivian are such nice people. Although I enjoyed their time getting to know each other at the Sandringham Estate, it felt like something was missing. I wanted a tad more complexity--to the characters and their overall story. I think the author attempts that toward the end of the novel with Malcolm and his nephew, Vivian and her promotion and then their sudden realization that their time together is coming to an end--something they hadn't even talked about before then. And yet, I still found Royal Holiday to be a delightful read in it's own way. It made me smile and I wanted to keep reading. I enjoyed my time with Vivian and Malcolm (and especially wish I could sample Julia's cooking!). I have heard the author's earlier books in the series are better, and I look forward to finding out for myself.

I know I'm not an ordinary ten-year-old kid. ~ Opening of Wonder 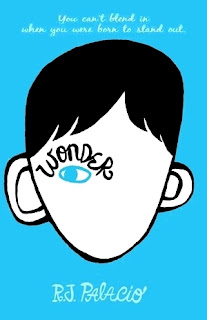 I won’t describe what I look like. Whatever you’re thinking, it’s probably worse.
August Pullman was born with a facial difference that, up until now, has prevented him from going to a mainstream school. Starting 5th grade at Beecher Prep, he wants nothing more than to be treated as an ordinary kid—but his new classmates can’t get past Auggie’s extraordinary face. Wonder, begins from Auggie’s point of view, but soon switches to include his classmates, his sister, her boyfriend, and others. [Goodreads Summary]

I have wanted to read Wonder for awhile now, but it was not until my daughter's 4th grade class began reading it this fall that I decided I would pick it up too.
Is it any wonder this is one of my favorite books this year? Well-written, with genuine and relatable characters that I instantly loved. I am so glad my daughter was required to read Wonder for school. It touches on quite a few real life experiences and lessons that I think most kids around her age can relate to--and even us as adults too. As we compared notes about the novel, it also opened the door to more in-depth discussions.
This is one of those books that I have so much to say about, and yet I am not quite sure how to put it into writing. I had all the feels while reading this novel--I laughed, I cried  (both out of sadness and joy), I got angry, and felt so proud of some of the characters. If I had to name a favorite character of all those I "met" this year, it would be Auggie. He's just an ordinary boy, just being himself. He, his family, and his friends touched my heart. Especially in a year when all the negativity seems amplified, Wonder, with its message of kindness, acceptance, understanding and respect, stands out even more.