Where Is Your Bookmark? The Deep & My Favorite Genre(s)

What are you up to this Friday? It has been a relatively quiet week here, which has been so very nice! I had a day off from work this week and was able to get some much needed stuff done around the house. I admit my blogging motivation has been next to null though. At least I have been reading, right?

Last night I  finished reading Nic Stone's Dear Martin, which I wish I could put in everyone's hands to read. Thank you again to all who voted for the book as my February read! I started reading The Deep by Alma Katsu today during my lunch break at work and thought I would share an excerpt or three with you today. 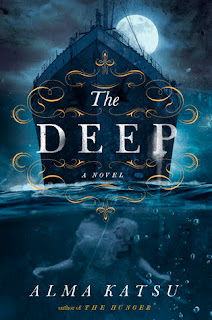 Someone, or something, is haunting the ship. That is the only way to explain the series of misfortunes that have plagued the passengers of the Titanic from the moment they set sail. The Titanic's passengers expected to enjoy an experience befitting the much-heralded ship's maiden voyage, but instead, amid mysterious disappearances and sudden deaths, find themselves in an eerie, unsettling twilight zone. While some of the guests and crew shrug off strange occurrences, several--including maid Annie Hebbley, guest Mark Fletcher, and millionaires Madeleine Astor and Benjamin Guggenheim--are convinced there's something more sinister going on. And then disaster strikes.

Years later, Annie, having survived that fateful night, has attempted to put her life back together by going to work as a nurse on the sixth sailing of the Britannic, newly refitted as a hospital ship to support British forces fighting World War I. When she happens across an unconscious Mark, now a soldier, she is at first thrilled and relieved to learn that he too survived the tragic night four years earlier. But soon his presence awakens deep-buried feelings and secrets, forcing her to reckon with the demons of her past--as they both discover that the terror may not yet be over.

Featuring an ensemble cast of characters and effortlessly combining the supernatural with the height of historical disaster, The Deep is an exploration of love and destiny, desire and innocence, and, above all, a quest to understand how our choices can lead us inexorably toward our doom. [Goodreads Summary]

For a moment, the falling feels like something else entirely--like a brief, wild glimpse of freedom.

But the surface comes too soon, shattering against her skin--a pane of glass--knocking the air out of her lungs.

My thoughts: I can feel her falling and the harsh reality as she hits the water from the way Katsu describes this scene and in the text that follows. I was hooked right from the start. Who is she? What is happening? I have lots of questions!

She is not mad.

My thoughts: An interesting first sentence given the location mentioned in the chapter heading, isn't it?  But then, during that time period, it was not unusual for women to be in asylums for a host of reasons, not necessarily because they were mentally ill. I continue to be all kinds of curious.


No one could know what had happened last night. Which meant that, once she'd managed to pull herself back up the servants' stairwell, dripping wet, she'd returned quietly to her rooms, stropped down, wrapped the soaking nightgown in a pillowcase, donned an overcoat (plain brown wool, it was an effective disguise), then sneaked back out and threw the incriminating bundle over the railing watching it disappear into the black of the night and sea.


My thoughts: I am only on chapter two so far, but peeking ahead, I came across this gem at 56% of the novel. I am not sure who this is, sneaking around, but I am very curious as to what she has been up to and what she is trying to hide.

Which genre do you like the most? (submitted by Shahnila @ Untiereaders)

I hate this question. Not because it is a bad question, but because it is like asking me to name my favorite book or color. I enjoy reading a wide variety of books--and I like to mix it up to keep things interesting, but these tend to be my go to genres:

To make it even better? A cross-genre mix!

I mentioned to my husband how hard it is for me to pick just one favorite, and he put it better than I possibly could: "Historical mystery romance set during World War I or II." He forgot to add witches and werewolves to the mix. And maybe a dragon. In outer space.