Bookish Mewsings: Sweep of the Blade/Taken/Warcross 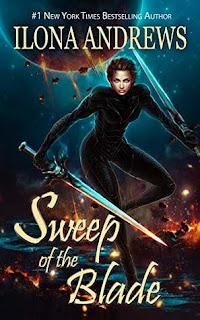 The hot wind flung brown dust into Maud's face. ~ Opening of Sweep of the Blade

This is my favorite urban fantasy/science fiction mash up series. I admit though I was a little leery about this one given the focus of the novel is on Dina’s sister, Maud DeMille, and not on Dina and here inn, both character and setting I have come to love. Maud is a great character in her own right, however, and I ended up loving Sweep of the Blade just as much as I have the other books in the series.

Maud wants nothing to do with the vampires after her husband betrayed his clan and had him, his wife, and daughter, Helen, banished to a desolate planet. She never meant to fall for the striking vampire Arland, Marshal of the House of Kahr. She does not know what to say when he asks for her hand in marriage. She does not trust the vampires and wants to protect her daughter. She also knows her daughter could benefit from further training given her nature, being human and vampire. What kind of life would her daughter have on earth, unable to interact with the human population? Maud agrees to go with him, but not to marry him, not ready yet to commit. Marrying a vampire of such high status from a respected House would bring its own complications, especially for a human. She knows this all too well.

As it is, the situation in the House of Kahr is not as perfect as it first may seem. Two warring Houses have come together for a wedding with the House of Kahr hosting and playing peacekeeper, intending to bring peace between their Houses. Something seems off though. And now someone is trying to kill Maud.

Action-packed, Sweep the Blade is a fast-paced novel that had me turning pages as fast as I could. Arland has played a regular character throughout the series, and you can read about his and Maud’s meeting in One Fell Sweep. The world building in this series continues to impress me, and it was interesting to get a look into the political and hierarchy of the series’ vampires. Arland was a bit of an arse early on in the series, but he has grown as a character, and I really like him for Maud and Helen. He sees Maud as an equal and treats Helen as if she were his own. Maud shows off a different side in Sweep of the Blade. Readers already knew she is a gifted fighter. She is also an amazing diplomat. I continue to enjoy this series quite a bit. 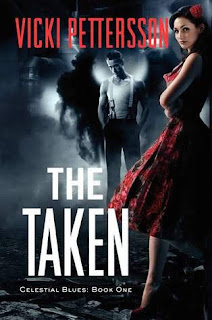 Here's the thing. ~ Opening of The Taken

I have had this book on my TBR shelf for quite a while now, and there it sat until a friend asked me to join in an online book reading and discussion about the book. Truth be told, I didn’t participate in the discussion, but I did read the book.

There is a lot mystery and romance all wrapped up in this urban fantasy novel. The Taken opens with the murder of a photographic journalist, Nicole Rockwell, and the angel who is supposed to guide her into the Everlast. Things do not quite go the way they are supposed to, and said angel, Griffin Shaw, is forced back into his human skin. In order to regain his place in the Everlast, he is tasked with escorting investigative journalist, Katherine "Kit" Craig there after her own death. You can imagine that didn’t quite go as planned either. Kit not only doesn’t die, but she teams up with Grif to find out who is behind the murder of her best friend Nicole, and also agrees to help Grif look into who may have killed his wife all those years ago. She, of course, has no idea he is a fallen angel or that Evie was his wife. At least not right away. And even when he tells her, she thinks he is crazy.

I had no idea what a rockabilly was before reading the The Taken. Rockabilly is one of the earliest forms of rock-n-roll from the 1950’s, and there are a group of people in contemporary times who have taken to that way of life. They dress in the 1950’s styles, and walk the talk of that time period. Kit is one of those women. It makes it much easier for Grif to slide right into the scene then, given he is straight out of the 1950’s. It was his era. I admit I was a little taken aback at how quickly Kit accepts Grif into her life particularly given how he entered it. But he is a good guy with good intentions, so I was able to overlook that. Somewhat.

I had not been expecting the novel to go down such a dark path in terms of the mystery. It left me with a hopeless feeling the more Grif and Kit uncovered. Even if they were able to get to the bottom of the mystery itself, the filth would remain and crop up in other ways (how is that for a vague spoiler?). I even wondered if perhaps this book should have come with a trigger warning.

I did like this one despite how it may seem, and plan to read further in the series. I liked both Grif and Kit quite a bit, and Vicki Pettersson knows how to pull in a reader and keep her hooked. I especially liked the fantasy aspects of the novel, which were often on the subtle side except for when they weren’t. I am curious to know the direction Pettersson will take the series next. 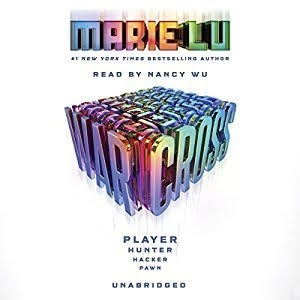 It's too damn cold of a day to be out on a hunt. ~ Opening of Warcross

This was my one audiobook of the year. I try to incorporate audiobooks into my life, but obviously I have not been too successful. Warcross is the first in a duology about a teenage bounty hunter with amazing hacking skills who hacks into the International Warcross Championships. It is not just a game. It is a way of life, connecting people through virtual reality. For some, it is an escape. For others, it is a way to make money, which is what Emeka Chen is hoping to do. Through a glitch, she is discovered and comes to the attention of the game’s creator, Hideo Tanaka. Instead of arresting her as she expected, he asks for her help, offering her money to find out who an even greater threat to his games is, someone who appears to have a more sinister plan for the games in mind.

This book was so much fun! It had a Ready Player One and Hunger Games feel to it, but is very much its own book. I loved Emeka’s character and being able to experience the world through her voice. I am sure the narrator deserves some credit for that as well. Nancy Wu did a great job setting the tone for the novel. Emeka is such an interesting character, as is Hideo. I only wish I could have gotten to know some of the minor characters a bit more. I have never really gotten into online games the way my husband has, but I can see the draw of a game like Warcross, especially given how much it crosses over into the people’s real lives. It seems impossible to avoid, really. Warcross is a combination of science fiction, mystery, and romance, which I cannot resist. I am looking forward to reading the next book, Wildcard. Maybe it will be my one audio for next year (although I will try to aim for more)!

Have you read any of these novels? If so, what did you think? If you have not, do any of them sound like something you might enjoy?