You would not think someone so afflicted would or could be cheerful, not prone to melancholy or miseries. ~ Opening of Miss Jane 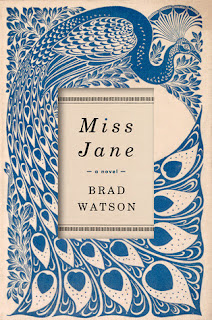 Brad Watson’s Miss Jane is the story of Jane Chisolm, a woman born with a genital birth defect. The novel, based loosely on the life of a relative of the author, takes the reader deep into rural Mississippi during the early twentieth century. Jane was born on her family’s farm to a mother whose heart was heavy from the loss of her young son and a distant but hardworking father.

Jane is isolated most of her life, attending only a semester of school. She is fairly precocious, however, picking up reading and math quickly on her own. She knows she will never led the normal expected life of a woman due to her deformity, but it does not stop her from feeling or loving or even living.

Given what I had heard about the book going in, I thought it would be more cheerful than it was. That isn’t to say it’s sad, but it is a book about life. And life, as most of us know, can be pretty messy and has its ups and downs. And so it is with Jane and her family. I appreciated the author’s depiction of each of the character’s, from Jane’s somber mother, her rebellious sister, and her distant father who finds comfort more and more in his apple brandy to the more thoughtful and curious Jane. This is as much a coming of age story as it is a character study. The reader sees Jane discovering who she is, struggling to accept her differences and eventually coming into her own. She knows loneliness and isolation. She knows hope and peace. Jane has a strong advocate in Dr. Thompson who befriends the child and does what he can to guide and protect her as she grows up.

I was particularly taken with Grace, Jane’s strong willed sister who wanted only to get out and away from her family. There was a part of me who could relate to her restlessness and feeling of being trapped. When she finally does get away, she proves she can weather just about any storm—her will to survive and stand on her own two feet strong.

Jane is a strong person herself, but in a different way than Grace. While Grace is all edges, Jane is smoother. Her strength is quieter and maybe not quite so obvious. She has a gentler approach to life, her curiosity and thoughtfulness carrying her through. It was impossible not to like Jane. She reminded me a bit of Melanie from The Girl With All the Gifts in that way. I couldn’t help but cheer for Jane and want for her all that life could offer. She makes the most of what she does have, which I think is a lesson many of us should take to heart.

The setting is very much a part of the story, the rural farm and woods surrounding it as well as the small town. The reader gets a real feel for what life was like during that time period, through the good times and then as the Depression sets in.

I found Miss Jane slow going, and I was easily distracted as I read. I am not entirely sure that is the book’s fault though given my state of mind and what was going on in my life at the time I read it. Had it not been for my Going Postal book club, I probably would have set it aside to try again at a later time. It says something though that I still came away from this novel appreciating and liking it overall.

You can learn more about Brad Watson and his books on the author's website.