"Mom is still alive, but she's going to be murdered at midnight on Good Friday, " Amanda Martin told the deputy chief, who didn't even think to question the girl; sh'ed already proved she knew more than he and all his colleagues in the Homicide put together. ~ First Sentence of Ripper 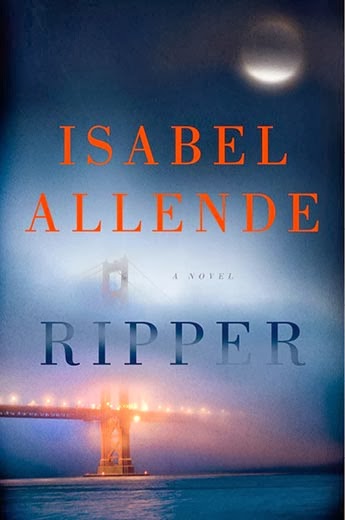 The Jackson women, Indiana and Amanda, have always had each other. Yet, while their bond is strong, mother and daughter are as different as night and day. Indiana, a beautiful holistic healer, is a free-spirited bohemian. Long divorced from Amanda's father, she's reluctant to settle down with either of the men who want her-Alan, the wealthy scion of one of San Francisco's elite families, and Ryan, an enigmatic, scarred former Navy SEAL.

While her mom looks for the good in people, Amanda is fascinated by the dark side of human nature, like her father, the SFPD's Deputy Chief of Homicide. Brilliant and introverted, the MIT-bound high school senior is a natural-born sleuth addicted to crime novels and Ripper, the online mystery game she plays with her beloved grandfather and friends around the world.

When a string of strange murders occurs across the city, Amanda plunges into her own investigation, discovering, before the police do, that the deaths may be connected. But the case becomes all too personal when Indiana suddenly vanishes. Could her mother's disappearance be linked to the serial killer? Now, with her mother's life on the line, the young detective must solve the most complex mystery she's ever faced before it's too late.

Ripper was my first experience with Isabel Allende, and, as I understand it, her first foray into crime fiction.  I knew going in this would be a slower paced mystery/thriller type novel, and that is okay. I can appreciate a book that takes its time, one that spends a lot of time developing the characters, and setting up the story. Ripper opens with a rather heinous murder that is brought to the attention of a group of online role players, led by Amanda Martin, with her grandfather acting as her henchman who have decided to try their hand at solving real life crimes instead of their own make believe ones.  It's an interesting premise to say the least.

The real story, however, lies with Indiana, Amanda, Martin, and Amanda's grandfather, with Indiana always at the center.  It makes sense given she is targeted by the killer--something revealed to the reader up front. What the reader doesn't know is why or how.  And so, Isabel Allende's novel, Ripper, unfolds.

The author spends much time describing Indiana's life and the people she encounters.  Each of those people play an important role in events to come, and I have to say, I appreciated the depth the author went into with each character, including the more eccentric and mysterious ones.  I especially liked how the author breathed life into her characters.  I really came to care for Amanda and her mother, Indiana.  Both were very different in terms of personality, but they are strong female leads, nonetheless.  I also really liked Amanda's grandfather--even though I did have to wonder at times how easily led by Amanda he was.

Ryan, the former Navy SEAL and his dog, were such interesting characters, especially given Ryan's past and the obstacles he had to overcome after losing his leg in battle.  The emotional turmoil he went through was palatable, especially given the psychological aspects of what he'd been through--and done. And the dog, a war hero in her own right. Atilla's own story was very moving.  I loved that dog.

I wish the author had allowed the reader to spend more time with the Ripper group in general.  They were an interesting group of kids, misfits really, each bringing their own knowledge and skills to the table.

At times I felt as if the author threw just about everything, including the kitchen sink, she could into this novel--and, somehow, it worked, mostly.  Allende is clearly a gifted storyteller.  Just about everything she includes in this novel has a purpose.  And while some threads of the story were stronger than others, some more necessary than others, it made for an interesting and entertaining novel.

It took a while for the mystery to unravel, and very little happens over the first half of the novel in terms of the actual solving of the crime.  I did wish the story hadn't meandered quite as much in the middle as it did. Nothing a tightening of the plot couldn't resolve.  The biggest trouble I had with the book, at it was a big one for me, was near the end.  Not the end itself, mind you, but the way the author revealed the who and why of the mystery.  The suspense was intense and the edge of your seat kind.  I did not mind the slow down as the point of view changed from the good guys to the bad.  Writing devices like that only increase the suspense. What bothered me was the repetition.  As the good guys uncovered major bits of the mystery, the view would shift to the killer, who would then go over the same information without much more insight than I, as the reader, had already been given. It happened again and again, enough the throw me out of the story.  Still, the ending is, like I said, intense and quite a ride.  It was a fitting ending to the novel overall.

And can I just add how much I loved the setting of the novel?  San Francisco is one of my favorite cities.  I am always happy to spend time there, in person or in a book.

There was much I liked about this book even as there were some aspects I had trouble with.  I am curious about Allende's other books and hope to one day try something else by her.  So many others love her writing.  I want to too, but this wasn't a book that won be over.

To learn more about Isabel Allende and her books, please visit the author's website.

I hope you will check out what others had to say about Ripper on the TLC Book Tours route!