Mouse is over two years old and only just had her first visit to a zoo this past weekend. It's a little zoo, about 40 miles away from where we live. It's well known for its monkeys. No matter how often her dad and I tried to explain what an anteater was, she insisted the anteaters were elephants (no elephants at this particular zoo), and she was very disappointed that she didn't get to see a hippopotamus. She did like watching the various kinds of monkeys swing from vine to vine, however. Her favorite though was riding the carousel. She was not too happy when it came time to get off. 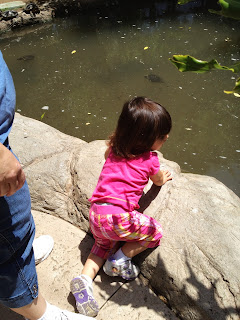 We also spent some time at the park this weekend, enjoying the pleasant weather--not too hot and not too cold. Memorial Day sees the start of the water fountain play area at the park, and Mouse took full advantage. We didn't take part in any of the city's Memorial Day festivities in honor of fallen soldiers, but our hearts were with them and the families and friends of those who have lost loved ones. Memorial Day is always a difficult one for me now, having lost my father in recent years. He'd been a veteran. And while he didn't die in battle, he had left a part of himself behind just as many who have served their countries do. Memorial Day is just one day, but, really, every day is a day to celebrate and honor those in the armed forces. 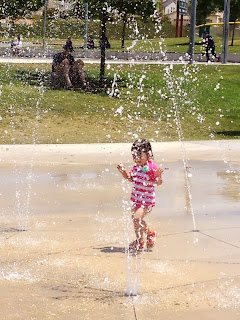 I managed to squeeze in a little reading this weekend, although not much. This past week was quite busy at work. I was on the interview panel, interviewing perspective employees, and this is one of our busiest times of year; so I have had plenty of work to keep me occupied.

I have fallen behind in my review writing again. I used to be good about keeping up, needing to write my thoughts about a book right after I finish it as a way to decompress and debrief. Now it seems I let them pile up. I am not sure that's the best idea.

I most recently read the follow up to Jamie Quaid's Boyfriend From Hell with the second book in her Saturn's Daughter series, Damn Him to Hell.  I am still trying to decide what to read next.  I was toying with the idea of reading World War Z by Max Brooks.  Sarah Jio's Violet's of March is calling to me though as is Richard Kramer's These Things Happen.  But Chris Bohjalian's Trans-Sister Radio is looking really good right about now too.  Choices, choices . . .

I recently read Laura Lippman's And When She Was Good.  What do you think of the introduction?  Would you keep reading?

The headline catches Heloise's eye as she waits in the always-long line at the Starbucks closest to her son's middle school.  Of course, a headline is supposed to call attention to itself.  That's its job.  Yet these letters are unusually huge, hectoring even, in a typeface suitable for a declaration of war or an invasion by aliens.  It's tack, tarted up, as much of a strumpet as the woman whose death it's trumpeting.