My Not so Review of The Road by Cormac McCarthy (Spoilers) 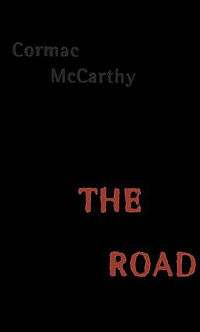 I was going to write a review of The Road, both the book by Cormac McCarthy, and the movie  (2009, directed by John Hillcoat), but I then decided not to.  Yet, here I sit, trying to come up with something for you . . . and nothing.  I am not sure what to say beyond the writing is brilliant, the story stark and depressing and yet full of love with a (very) dim spark of hope.  Once I had time to actually sit down and get into it, rather than the stolen reading moments I sneaked in here and there, I was captivated and completely drawn to the story of this young boy and his father as they traveled toward the coast in an inhospitable, post-apocalyptic world.

For me, it's impossible not to talk about this novel--or the movie--without talking about the ending.  It was an important ending--and a powerful one.  I finished the novel while at work, and so didn't have as strong a reaction to it as I might have had I been home, free to feel whatever emotions came.  I was able to let my emotions flow after the movie, however, and it was awhile before the tears stopped. A parent dying and leaving behind a child (or a child dying) is a trigger for me.  And both the movie and book affected me for days.  I imagine they would have anyway, even if I wasn't more sensitive to that particular topic.  Still, it was compounded by the recent real life murder of a local police officer who left behind a wife and two children.  No matter how hard I tried to block out the thought of those poor kids, I couldn't do it.  Although I did not know this particular officer, I have worked with others on the force.  We are community partners, fighting the same fight.

And so, a few weeks later, I still am not sure what to write about The Road.  It's a book I have wanted to read since I first heard the hype when it was published.  Then I put off reading it because of the hype. And now that I have finally gotten to it, I find at a loss for what to say--in part, because of the hype.  What's there to say about a book that just about everyone has already read and dissected?  All I can say is that, for me, this book was more a visceral read than one I analyzed as I read.

I liked the movie and felt it was well done, although the book is better.  I liked better my own vision of the world McCarthy created rather than that on the big screen.  The changes between the two were minor and did not really change the story.  Still, the book seems more powerful, more meaningful to me.  And yet seeing the story on the screen, brought it even more home for me.  I'm not sure I can explain why exactly.

To learn more about Cormac McCarthy and his books, please visit the author's website.

Source: I purchased a copy of this book and movie for my own viewing pleasure.