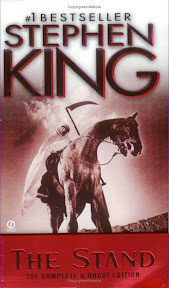 Where to begin? I got caught up in the enthusiasm to read The Stand as part of the Stand-along—probably the only way I was going to read it any time soon. I had it in my head I had to read it before I read The Shining (which now I am free to read whenever I want! Yay!). The two books aren’t connected or anything. It’s just the way my brain works. Anyway, I read The Stand. I wasn’t sure I would make it all the way through. I stopped a little over half way through and read five or six other books before picking The Stand back up.

I hoped to love The Stand like so many. I didn’t. I liked it. I liked certain parts much more than others. I didn’t love it though. The novel takes its time getting off the ground—well, after the initial rush to the car and out on the road, that is. It meanders a while as the disease takes hold, killing off the majority of the population. My daughter and I both had colds as I started the book—and well, you can imagine how that went over. Reading a book about a lethal flu like virus and then seeing my daughter’s nose running . . . I’d be lying if I said I didn’t feel a certain amount of panic, however small.

I actually liked the first part of the book quite a bit, the way King described the spread of the disease and the impact it had on the characters. It was both frightening and at times overwhelming. King has a way of making fantasy seem so real. I got a good sense of the devastation and how alone the characters must have been feeling.

My heart ached for Fran, pregnant and alone. Well, she had Harold, but I never quite warmed to him—something seemed off about him—and I think to Fran too. Then there was Stu. How awful it must have been for him, quarantined, separated from his friends and fellow townsfolk, tested and prodded . . . He and Nick, the deaf mute, were my favorite characters. They both seemed to have good heads on their shoulders and were reasonable under pressure. If I was ever in a similar situation, I would want them by my side. Nick’s back story was heartbreaking—I really came to like and respect him. For all he’d been through, he was amazingly strong and capable. Thanks to Tom Cullen, I have a couple of choice phrases stuck in my head. I actually caught myself saying to my daughter, “You are loud today. M-O-O-N, that spells loud.” And “Laws, yes!” I never quite saw Larry Underwood the way his mother or even he saw himself. He seemed like a good guy right from the start, even if a bit foolhardy. To say the least, the cast of characters is quite long and each made an impression on me in their own way.

There came a point in the book, about where I took my long break, when I told my husband over dinner one night that I wasn’t sure I wanted to continue, especially if the book continued in the direction it was going. When I told him why (God versus Devil like scenario), he told me then I might want to stop reading because that’s exactly where the book was going. Of course, this was also the point everyone was telling me the book got good.
The speed of the book did pick up considerably about 75% in (I was reading my e-copy by that point as my paper copy was beginning to fall apart) and I found myself reading more intently. I can’t say I liked the final third of the book better, but it certainly held my attention.

I could write about the more worldly issues addressed in the book—about the forming of society, the role religion and politics takes in the process, etc. It’s all there. But I can’t say I really carried much away from the novel in that regard. My focus was more on being entertained and getting through the book.

Stephen King is a great story teller. He’s the kind of guy you want to hang out with while sitting around the campfire making smores. He creates characters I wouldn’t mind getting to know in real life – at least the good guys.  While the story--towards the end--might not have been my cup of tea, I still enjoyed it.

I watched the mini—series right after finishing the book and have to say, it was awful. It was dated and campy and the acting was terrible. I sure hope Ben Affleck’s version is better.

Source: I purchased both the mass market paperback copy and the e-copy I read from.