Bookish Thoughts: A Trick of the Light by Louise Penny 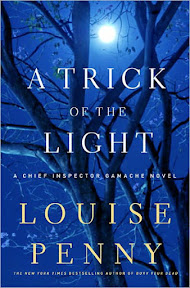 A Trick of the Light by Louise Penny


Just about everyone I know who reads mysteries and has read Louise Penny's Chief Inspector Gamache's series loves and recommends it. I actually have the first book in the series in my TBR collection. Several books into the series later, I'm finally reading one of her books--just not that first book in the series. I was a big stickler for reading series books in order until I began blogging. I am not sure what's happened to me. Of course, in this instance, I didn't have time to play catch up with the series--seven books total. A Trick of the Light was short-listed for an Independent Literary Award and so I was under a deadline to read it.

No matter. Like with a lot of mystery series, the book stands well on its own. In this case, however, I really do wish I had read the previous books as I have a feeling many of the characters have made appearances before, all tied to another mystery. And that other mystery, well, could it be from another book that is now spoiled? Spoiled in the sense of my knowing the outcome as opposed to being ruined, I mean. There's also the characters' personal stories, which take place over the course of the books--there is so much I feel I missed out on. Yet, the author did a good job of putting enough of the pieces together in this one novel to make it okay that I didn't start with the first book in the series. I just wish I did.

Anyhow, I went into Louise Penny's novel with high expectations. Not only was it a nominee for an award but it also came so highly recommended. Fortunately, I wasn't disappointed. I loved just about everything in this book: from the depth of the characters, including many of the minor ones; the easy and sometimes comical banter between the characters; the serious and sensitive handling of the crime and the issues surrounding it; the atmospheric setting; and the superb writing.

But now Lillian herself is dead. Found among the bleeding hearts and lilacs of Clara Morrow's garden in Three Pines, shattering the celebrations of Clara's solo show at the famed Musée in Montreal. Chief Inspector Gamache, the head of homicide at the Sûreté du Québec, is called to the tiny Quebec village and there he finds the art world gathered, and with it a world of shading and nuance, a world of shadow and light. Where nothing is as it seems. Behind every smile there lurks a sneer. Inside every sweet relationship there hides a broken heart. And even when facts are slowly exposed, it is no longer clear to Gamache and his team if what they've found is the truth, or simply a trick of the light.


I am not well versed in the art world. My mother-in-law paints beautiful landscapes and my husband can put together a lovely sketch, but I'm a stick figure woman all the way. Stick figures with big heads. So, the setting was one that was a bit foreign to me (besides being set in Canada). I felt right at home in Three Pines, however. It sounds like a place I wouldn't mind living.

There was one scene in particular that was difficult for me to read, the one where the detectives have to tell the parents of the victim that she's dead. It was heart breaking. All I could think about was how horrible it would be to be in their shoes and how I hope I (or you) never have to experience anything like that in our lives. I have read and seen lots of scenes like this over the years, but having just had a child of my own, I am a little more sensitive to it right now, I think.

The other aspect that of the novel that really got to me was the focus on addiction, particularly alcoholism. It is a problem that touches many of us in one way or another. For me it was in living with an alcoholic parent. The author approached the topic in a very hands on way, offering different perspectives through the various characters, many of which were in different stages of addiction. I don't think it's a major spoiler to mention this--although I won't get more specific.

I really appreciated how the author presented the characters--how she used the theme of light and dark in drawing them out. Everyone, including the main protagonist, Inspector Gamache, had many shades to him. On one hand he was near perfect, admired by just about all; on the other, he had his share of secrets and doubt.

Will I read another Louise Penny novel? Absolutely! I will never get caught up with all the series I want to read if I keep this up!

You can learn more about Louise Penny and her books on the author's website.

Source: A copy of this book was provided by the publisher for review.

This book counts towards the What's in a Name Challenge and The Eclectic Reading Challenge.